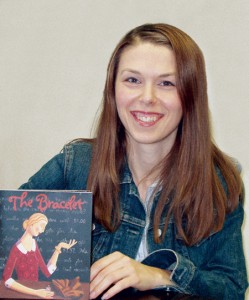 The Bracelet, a tender fable about how a teacher’s influence can change a young student’s life, has additional charm thanks to 15 full-page color illustrations by Orem, Utah, designer Miriam de Rosier, ’00.

The alumna, whose work has appeared in the New York Times, the Washington Post, and the Wall Street Journal, showed sample cards of her work at a World Book trade show in Chicago in 2000, which led to a design contract. The Bracelet, released in September 2003, is already on its third printing.

De Rosier says she wanted the book to have a timeless, classic feel, so she took her inspiration from the art deco movement of the 1920s and ’30s and used a bright color palette.

The artist says her first design opportunities came shortly after college, and her first assignment was from an editor at Brown University, who asked her to depict a multicultural marriage between a Jewish man and a Chinese woman. “I was really nervous, because it was a real job, not just an assignment for class,” she explains. Happily, the university accepted her first rendition, and she began an active freelance career.

Her interest in art comes from lifelong memories of her mother, Charlotte, painting and encouraging her children in the arts. Charlotte de Rosier also influenced her son John M. de Rosier, ’95, who works as an editorial cartoonist in New York.