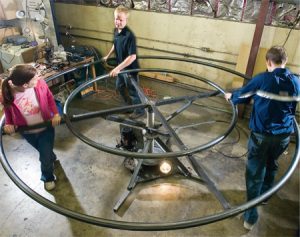 The BYU-engineered merry-go-round produces enough electricity to light three or four rooms from the same energy 60-pound children would expel climbing 10 feet of stairs in 35 seconds.

Six engineering students recently unveiled a merry-go-round capable of turning children’s play into electricity. The students’ prototype uses a direct-current-generator system to turn the rambunctious energy of kids into electricity that can light schoolhouses in places like rural Ghana. For two semesters the team labored to develop a device complicated enough to capture and translate human energy into electricity, but simple enough to incorporate old car parts.

“Portions of the merry-go-round were made from parts found at a scrap yard, which is what people have to work with in Ghana,” says team leader Adrian T. Williams (BS ’07). “The project also promotes sustainable development because it is more than just lighting a schoolhouse, it is providing self-sustained education to these people so that they can be engineers and entrepreneurs themselves.”

Enter to learn, go forth to serve. BYU Magazine explored how one alum in every state carries out this charge.

Laugh Your Way Through Life

Apparently, there are plenty of Palmer's students who want to be like him after having learned from.