Supporting the Weight of the Future

A crane slowly lowers a 16,000-pound concrete slab, while four spindly looking, web-walled cylinders sit perilously below. The voices of the students and professors who are gathered in a lab of the Clyde Building drop off as the huge mass comes to rest on the diminutive structures, which weigh less than one pound together. Once the hydraulic supports are removed, conversation picks up again, everyone clearly impressed but not surprised. They know the tiny supports are capable of bearing twice that weight. 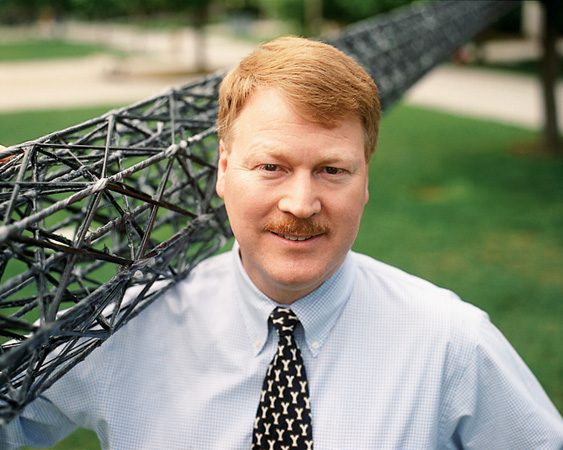 At only 48 pounds, a 40-foot IsoTruss beam is easily hefted by civil engineering professor David Jensen, who hopes the innovative supports will shoulder the weight of future structures.

Will such structures someday support bridges and highway overpasses? David W. Jensen, ’80, a professor of civil engineering, hopes so. Thanks to his research, the innovative structural design of the IsoTruss is catching the attention of organizations all over the world. With potential use in satellites, freeway pillars, telephone poles, aircraft, submarines, bicycle frames, and other products, this lightweight composite is extremely strong and is less expensive and longer lasting than traditional materials.The structure of the IsoTruss is roughly cylindrical, its redundant geometrical patterns creating a three-dimensional hexagon. Looking down the center of the IsoTruss, its shape resembles a Star of David (two inverted triangles). At each of the six points of the star (called nodes), lateral connectors run the length of the hexagonal form, adding stability. Larry Francom, the inventor of the original six-node IsoTruss, had discovered the inherent strength of using 60-degree angles throughout such a structure.The IsoTruss also benefitted from being a composite structure. A simple example of a composite at work is strapping tape, which has fibers running through it that make it difficult to tear “against the grain.” In the IsoTruss’ case, carbon and fiberglass strands bonded with epoxy give it phenomenal strength in several directions.In 1995 Francom approached BYU with the design, requesting help in acquiring a patent. Jensen helped secure the patent and since that time has developed ways to increase the IsoTruss’ strength and functionality for potential applications.“David Jensen and his colleagues recognized for a long time that the most efficient use of composite materials was to keep the fiber straight,” explains Stanford professor Stephen W. Tsai, who worked on a similar concept called the IsoGrid (a NASA and McDonald Douglas–designed forerunner to the IsoTruss). “While their recognition of this fact was not unique, building a structure that could utilize it was indeed most outstanding.”One of Jensen’s adaptations was to make the IsoTruss more structurally efficient. “On the six-node model, more than half of the area is eaten up by the structure,” he explains. Thus he experimented with other design possibilities, including an IsoTruss with eight nodes. The six- and eight-node models have the same overall volume, but the eight-node model adds interior space.Though the eight-node model has somewhat reduced radial compression strength, Jensen says the positives of the innovation outweigh any negatives. “What we’re getting–interior space–is much more important than what we’re giving up,” he explains.Tsai calls the structure “exceptionally revolutionary,” and it’s easy to see why. The design is power-packed. For example, a six-foot-long IsoTruss beam weighs just 1.2 pounds. Alone, each individual component can support only about a half-pound load. But because of the stability of the design and its construction as a composite, the beam’s total load capacity is more than 3,400 pounds.The IsoTruss is also easier to maneuver than typical construction materials. For instance, a 40-foot IsoTruss beam, which can be used in tilt-up wall construction, is light enough that a single person can maneuver it. A steel beam used for the same job typically weighs about 400 pounds and must be carried by crane; it may take as many as five workers to move the steel beam a few inches. 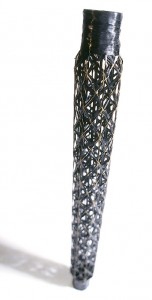 For many businesses, shedding pounds translates into saving money. For example, the cost of launching one pound of weight into space is about $10,000, figuring in the design of a rocket that can carry the final load and the fuel required to get the craft off the ground. Using the IsoTruss, overall aircraft weight could be reduced considerably, and saving even 100 pounds would mean a difference of $1 million.Jensen, who has a background in and love for aeronautics, sees aerospace as the application with the most potential for the IsoTruss. He dreams that one day the IsoTruss may play an integral role in the design of an aircraft fuselage. But until then, he expects it to be applied in smaller areas of the craft, such as doors, compartments, and structural components.Engineers from many industries have shown interest in the IsoTruss. A satellite company has explored the possibility of using IsoTruss beams as the satellite’s “arms”; its lightweight qualities would make it easier and cheaper to launch into space, and its durability would help satellites last longer once they entered orbit. Automotive companies have also expressed interest in the IsoTruss because of its potential to reduce crash damage.Jensen is currently working on two other IsoTruss applications. The first is concrete reinforcement in such structures as freeway overpass pillars. Because it reduces time and labor costs (through prefabrication and its light weight), allows better quality control, resists corrosion, lasts longer, and exhibits higher ductility than steel, both the Utah and California departments of transportation have decided to fund research on ways to use the IsoTruss in future infrastructure development.Jensen is also pursuing the use of the IsoTruss for telephone poles, especially in areas that are still developing electricity-supply infrastructures, such as the Three Rivers Dam area in China. Since the IsoTruss doesn’t corrode, it is more cost-effective than wood poles in the long run, even though its production costs are about the same. It’s also environmentally friendly, limiting tree cutting and lessening the use of the contaminant creosote, a treatment that slows wood decay. 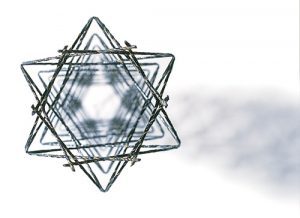 Because of the stability of the design and its construction as a composite, a 1.2-pound IsoTruss beam’s total load capacity is more than 3,400 pounds.

The IsoTruss pole “eliminates the environmental issues and maintenance problems attributed to creosote, rusting steel, cracking concrete, decaying wood, and woodpecker- and moisture-induced damage, while simultaneously reducing the weight and improving the visual appeal,” Jensen wrote in the cover story of the Sept.–Oct. issue of the journal of the Society for the Advancement of Material and Process Engineering (SAMPE). “The reduced weight lowers shipping costs, simplifies installation, minimizes handling concerns, and reduces dead loads.”Such potential benefits have not gone unnoticed. The IsoTruss has caught the attention of the state-sponsored Centers of Excellence Program, which funds late-stage university research in order to develop new products, high-tech companies, and skilled jobs. By creating the Center for Advanced Structural Composites at BYU, the state of Utah has clearly shown its support for the IsoTruss as an important technological development.With such support the IsoTruss could someday begin showing up along roadsides as utility and freeway sign poles, in backpack and bicycle frames, in satellites and planes, and in any number of other structures where lightweight, rigid strength is valued. Thanks to Jensen’s efforts, the next step into the future of structural design is now in view.

Megan Vandre is a contributing editor of Ancestry magazine. She is pursuing her master’s degree in magazine publishing at Northwestern University.

A new professor is teaching her native language in the first university-level class ever offered for it.

You Live in Cougar Town