You Live in Cougar Town 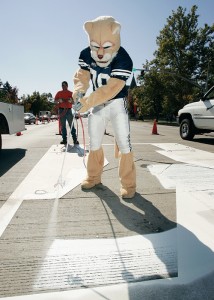 Cosmo lends a painting paw to Provo City workers, adding a white block Y at the intersection of University Avenue and Center Street. This and other Cougar Town efforts has encouraged community support beyond the borders of Provo proper.

Provo City has painted the town blue and white to celebrate Cougar Town, a new collaborative project with BYU, Provo, and local businesses to generate community support for BYU athletics.

Provo City workers—with a little help from Cosmo—painted a 14.5-foot tall block Y at the intersection of University Avenue and Center Street. They also painted the blue-and-white symbol at five other intersections on Provo’s busiest thoroughfares.

“For college towns, painting the streets is not unusual,” explains Scott Peppler, Provo City public service director. “This is the kind of spirit you typically see in a college town with a great team and a great university.” 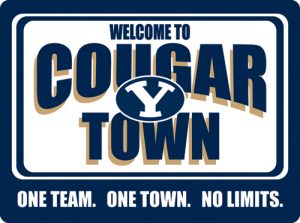 “It is fun for people who love the Cougars to drive along University Avenue and see these big block Ys,” adds Provo mayor Lewis K. Billings. “This is our city and our university, and we are eager to support BYU.” So supportive, in fact, that on Sept. 1, he read a proclamation declaring that every Saturday BYU plays at LaVell Edwards Stadium, Provo becomes Cougar Town. On those days, he explains, “Provo’s borders are dissolved and every BYU fan around the world becomes a resident of Cougar Town.”

BYU is calling the Cougar Town campaign “One team. One town. No limits,” with the idea that the true spirit of Cougar Town is found anywhere there are Cougar fans.

“We have had several well-known graduates who don’t live in Provo confirm that they live in Cougar Town,” says Brett F. Eden (BA ’99), BYU licensing and trademark manager. “In a television spot, for example, Reno Mahe (’02) says, ‘I love playing for the Philadelphia Eagles, but I live in Cougar Town.’ I see the spirit of this catching on and becoming a force over the next several years. I hope to push the concept until it reaches a point where it has a life of its own.”

Eden believes such support is possible and says the business community has responded enthusiastically. “They are wearing Cougar-wear, putting our logos on their windows, and showing better support than I’ve ever seen them do.”

“It’s good to see the momentum of the business community. It’s the school; it’s the students. Game weeks are great weeks in Provo,” says Billings.

A Skeleton of Steel

Throughout fall semester, the Gordon B. Hinckley Alumni and Visitors Center grew, beam by beam.

An Undisputed Gold medal for BYU

The 2002 Olympic Games showcased not only Salt Lake City and Utah, but BYU as well.