By Stephanie Tripp in the Summer 1997 Issue

The event: The 1996 Florida Department of Citrus Campus Challenge.

A team of four senior public relations majors from BYU took the challenge and won Þrst place in the competition. As part of their reward, the team traveled to Florida in mid-March and presented the research, planning, and tactics used in their campus campaign to the Florida Department of Citrus (FDOC), the sponsor of the challenge.

“The experience in a professional situation was just phenomenal,” said Brian Anderson, a team member from Orem. “It was impressive that the FDOC would take the time to allow us to give a presentation like that.”

“Everyone was impressed,” said Laurie J. Wilson, head of BYU’s public relations emphasis, who accompanied the group to Florida. “Their presentation was excellent.”

Along with a trip to Florida, the award included a $2,000 prize given to the BYU chapter of the Public Relations Student Society of America (PRSSA). 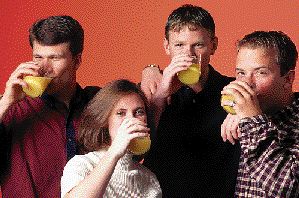 The winning campaign was a Þve-week program with the goal of increasing consumption of Florida orange juice, promoting the health beneÞts of orange juice, and increasing the awareness of the Florida Sunshine Tree logo.

At the end of the Þve weeks, which ran from Nov. 1 to Dec. 6, 1996, the BYU team had accomplished the goal, said Ivy Leventhal, FDOC marketing communications director.

“After evaluating each chapter’s Þnal report, we felt that BYU did the best job of communicating the important health and wellness messages of Florida orange juice,” Leventhal said. “Their program did a terriÞc job of reaching students both on and off campus through partnerships, on-campus events, and the media.”

Follow-up surveys conducted on campus by the BYU team indicated the campaign’s success. Awareness of the Florida Sunshine Tree logo increased from 42 percent to 65 percent, and overall consumption of orange juice on campus also increased. In addition, knowledge that orange juice helps prevent cancer and other diseases gained 12 percentage points.

“We focused on the health beneÞts of orange juice,” said team member Paul Walker, from Monticello, Utah. “Everything that was printed talked about health beneÞts; I think that greatly affected our winning.”

For the campaign, the group hung posters and handed out þyers and fact sheets describing the health beneÞts of orange juice. They also gave out nearly 3,000 samples of orange juice at taste-testing booths at the south entrance of the Harold B. Lee Library.

Other activities included dances at a local dance club, Family Home Evening night at a roller-skating rink, a free prepregnancy and prenatal conference, a booth at the Turkey Trot 5K run, a roving Orange Juice Mobile, contests, and raffles.

“In class we learn the theories about campaigns, and this was a chance to do a real campaign,” Anderson said. “We wanted to get the experience, and it was a pleasant surprise to win Þrst place.”

“Many students go through college in class listening to lectures,” Walker said. “Many people don’t get practical experience, and this experience gave us a chance to do what we are going to be doing later in life.”

In addition to Anderson and Walker, the team included Michele Davis from Slidell, La., and Scott Porter from Las Vegas.

The public relations emphasis at BYU is considered one of the best programs in the nation by educators and professionals and has a consistent record of success in national competitions and elections. Two members of BYU’s PRSSA chapter have been chosen as national PRSSA officers next year: John Starkweather, a senior from Hollister, Calif., will be the organization’s president, and Laurie Fisher, a junior from Tustin, Calif., will be the vice president of professional development.