Strutting in the South 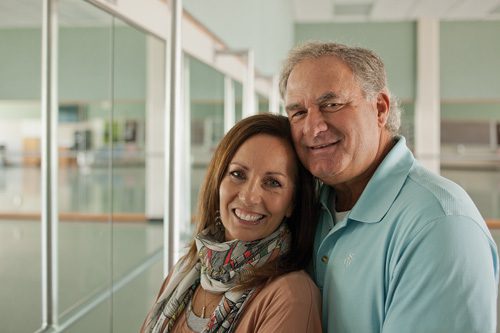 Although they performed on the same football field, Nancy and Mark Giles fell in love in an unexpected place. They are now transforming Nancy’s passion for dance into Southern Strutt, one of the top dance programs in the nation.

“No way was I going to Provo,” Mark explains. “My dad was a football, baseball, and basketball coach. My whole life was athletics, and I had been recruited by the University of South Carolina, where Dad had played in the ’40s. Besides, I had a girlfriend.”

When Edwards suggested he fly out to see the campus anyway, Mark agreed to a weekend but told Edwards it was going to be a waste of time. Little did Mark know then how a visit to campus would change his life.

“I fell in love with BYU,” Mark says. “It was the era of basketball great Kresimir Ćosić. I watched him play in the Marriott Center and had the time of my life.”

A week later Coach Edwards visited Mark’s family in South Carolina, and Mark signed on as a Cougar. “It changed my life overnight,” he says. “Coach Edwards treated [the team] like family. He put us and our education first and looked out for us.”

Mark played quarterback and led the nation in punting for the first weeks of the 1974 season. Later that year the team won the WAC championship. Gary W. Sheide (MS ’77), the starting quarterback, separated his shoulder early in the Fiesta Bowl, so Mark played essentially the entire game.

Nancy Hite (BA ’78), a Cougarette, was also performing in Cougar Stadium during that football season. As if being a Cougarette was not enough to keep the dance major busy, she also performed with Young Ambassadors and the Modern Dance Company.

The only thing Mark knew about Nancy was that she was a Cougarette; the only thing Nancy knew about Mark was that he played football. But an advanced physiology class they both attended helped bring the duo together.

“It wasn’t long before we were interested in each other,” Nancy says. “But I would dance at 6 a.m., attend school, and practice for Cougarettes in the evening. The class was about the only time we could be together.”

Around Thanksgiving, the professor pulled them aside and said they no longer needed to attend class—there was no way either one was going to pass. “We had spent too much time talking in the back of the room,” Mark reveals.

The rest of the semester they spent that now-free hour together. They later retook the class—and both passed. After they married, Nancy auditioned for the Donny and Marie (Osmond) variety show and was selected from among 500 dancers. She performed on the show and toured worldwide.

“It was a great moneymaker, but [later] we had a baby and it wasn’t what I wanted to do with my life,” Nancy says. So they moved to South Carolina where Mark worked for an investment company. Although successful, Mark eventually wanted a change. In 1982 he suggested opening a dance studio, which both surprised and delighted his wife.

“We got a lot of publicity because of Donny and Marie,” Nancy says. “We built a dance program where Mark ran the business and took care of maintenance and I directed the dance program. We have five children, and all were involved.”

Named Southern Strutt, the dance studio includes ballet, jazz, lyrical, hip hop, musical theater, tap, and ballroom. It began in a portable, one-room facility at a high school with Nancy as the teacher and has expanded to two buildings with 10,000 square feet of studio space. Many of her students have become professional dancers on Broadway and television. The magazine Dance Teacher Now honored Nancy with a national award for teaching excellence, and DanceSpirit Magazine named Southern Strutt the best dance program in South Carolina and third most competitive in North America.

“This has been a great life for both of us,” Nancy says. “Mark still plays sports and has coached the golf team at the high school in Columbia, S.C. He also eventually took the three credits necessary to earn his degree in physical education—to be a role model for our children.”

As Mark and Nancy Giles have elevated dance in the South, they have also realized their vision of helping young people and adults celebrate life through dance.

Lawrence J. Green (BM ’79) strummed on a $5 six string in his grad school audition for American University. He got in.

For the last three years the College of Nursing has sponsored a Homecoming service project.