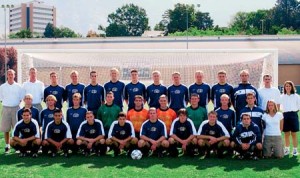 IN a grueling three-day, six-game tournament in Tuscaloosa, Ala., the men’s soccer team won the Collegiate Club National Championship for the fifth time in six years.The Cougars dominated the tournament, winning all six games, including a 4-1 win over rival and 2000 champion Penn State. John V. Morris, ’02, BYU‘s starting goalie and the tournament MVP, helped the Cougars seal their championship with a 4-0 shut-out against Illinois in the final game.Although several players are graduating or leaving on missions, Coach Christopher N. Watkins, ’98, expects to be in the championships again next year. “We’ve got so much talent on this team, it’s scary.”

Men’s BasketballSteve Cleveland has signed a multi-year contract to continue as head basketball coach. After taking over a program that had just completed a 1-25 season, Cleveland has improved the Cougars each year, posting records of 9-21, 12-16, 22-11, and 24-9–a total of 67-57 for his four years in Provo.Women’s SoccerBYU finished the 2001 season with a 14-7-1 record, a third-straight MWC crown, and a fifth-straight appearance in the NCAA tournament.Women’s VolleyballBYU finished the season with a 20-9 record but lost in the first round of the NCAA tournament.

After nearly dropping out as a student, thanks to mentors he thrived at BYU. Now he’s the one doing the mentoring.

The BYU Cougars lost only one game all season: their elite-eight match.

Eye of the Cougar

Elijah Bryant nearly gave up. But trial transformed his game.