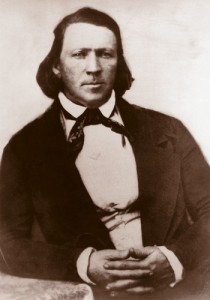 In honor of the 200th anniversary of his birth, Brigham Young will be celebrated at Homecoming 2001.

WHILE Brigham Young won’t be on hand for the BYU Homecoming celebration that commemorates the 200th anniversary of his birth, his legacy will be apparent during an entertainment extravaganza that honors his life.

Homecoming Spectacular, Oct. 18 and 19 at 7:30 p.m. in the Marriott Center, will celebrate the achievements of the beloved prophet and will culminate with an original composition by K. Newell Dayley, ’64, music professor and dean of the College of Fine Arts and Communications. The composition, Lion of the Lord, offers three looks into Brigham Young’s life: up to age 30 and his conversion to the Church, his preparation time with Joseph Smith, and his launch as the prophet. BYU president Merrill J. Bateman will narrate the work, which will feature the Wind Symphony and the Concert Choir.

“There is much rich material about Brigham Young, and we are using it to structure our production,” says Spectacular producer Michael G. Handley, ’83. “We are leaning toward using what others have said about him as part of a tribute rather than having our audiences see or hear an impersonation of the prophet. As we plan the show, we are looking at his writings, sayings, and beliefs, particularly regarding education and the arts. They transcend time and help define how his legacy affects us today.”

“Much of our show will follow the Homecoming theme, Shades of Yesterday,” says artistic director Janielle Hildebrandt Christensen, ’67. “But we will look at his impact not only on the past but also on the present and future. We want to emphasize that this is not a pioneer show. It offers a look at a remarkable person as we showcase some considerable student talent.”

In addition to the Wind Symphony and the Concert Choir, the show will feature performances by the Young Ambassadors, Living Legends, the International Folk Dance Ensemble, Theatre Ballet, and the Ballroom Dance Company.

The Young Ambassadors will preview numbers from their new show, Living Legends will pay tribute to Brigham Young’s love for Native Americans, the folk dancers will perform stylized American dances using a live band, and the Concert Choir will sing traditional western American folk songs. Enhancing the show will be a multifaceted presentation designed by Glenn L. Anderson, ’77.

New this year is a set onto which multimedia elements can be projected. “This is an exciting design that allows us to have greatly enhanced lighting and special effects,” Christensen adds.

Homecoming Spectacular will be broadcast for the first time on BYUTV, which opens the show to a much larger potential audience.

In addition to the Spectacular, Brigham Young will be honored in several other ways. Students have been invited to learn more about Brigham Young, for example, by participating in the Brimhall Essay Contest, an annual competition that honors the person designated as the university founder for Founders Day. The winner will read his or her entry at the Homecoming opening ceremonies, Oct. 16 at 11 a.m. in the Marriott Center. Also, an exhibition in the gallery space adjacent to the Wilkinson Student Center ballroom will focus on Brigham Young and his philosophies about education.

Donated to BYU in late 2004, an original photograph of Brigham Young dates to about 1854.

Homecoming 2005 honors Joseph Smith and his commitment to learning.