Before a capacity crowd in the Marriott Center on Sept. 20, President Gordon B. Hinckley, president of the Church of Jesus Christ, dedicated the newly completed Joseph F. Smith Building and praised its namesake.

“He was a man of unshakable courage in the face of adversity, [a man] of industry and devotion, and of faith and knowledge concerning this great latter-day work of the Redeemer,” said President Hinckley. “It is proper that this wonderful new building carry the name of this remarkable man.”

President Hinckley, who is also chair of the BYU Board of Trustees, spoke about the teachings and life of Joseph F. Smith, the sixth president of the Church, and said, “I am the fifteenth, and I feel like a pygmy when I think of standing in the same circle with him.”

Joining President Hinckley and BYU president Cecil O. Samuelson, of the First Quorum of the Seventy, were Presidents Thomas S. Monson and James E. Faust, of the First Presidency, and President Boyd K. Packer, of the Quorum of the Twelve Apostles. Other general authorities and members of the Board of Trustees also attended the event. 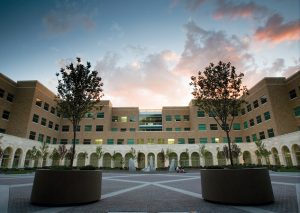 Built on the site of the old Joseph F. Smith Family Living Center, the 280,000-square-foot Joseph F. Smith Building houses the two largest colleges on campus: the College of Family, Home, and Social Sciences and the College of Humanities. Its 25 classrooms can accommodate 1,400 students, and on Sundays it is home to 10 student wards. The building also houses faculty offices and conference rooms as well as several laboratories and academic centers affiliated with the two colleges, including the following:

Constructed with the theme of “light and truth,” the modern glass facade of the building’s main entrance contrasts with a cloistered inner courtyard featuring a fountain. The glass-enclosed gallery, a beautiful, light-drenched space, is designed to house a series of exhibits that will expand on the educational experiences offered in the building.

The building honors President Joseph F. Smith (1838–1918), who was 5 years old when his father, Hyrum Smith, and uncle, Joseph Smith, were martyred in Carthage, Ill. Known as a preacher of righteousness, he was called as a missionary to the Sandwich Islands, now Hawaii, when he was 15 years old.

In his dedicatory prayer for the Smith Family Living Center in 1955, Willard R. Smith, a son of Joseph F. Smith, spoke of President Smith’s “great love for the youth, the children of Zion; and the great hope that was always in his breast that opportunities and privileges might be granted them to be spiritually enlightened, to be physically strengthened, and to be put in tune with our Father in Heaven and His Son, Jesus Christ.”

Finding a Language for Family

Finding the right language in foster families can be puzzling.