Homecoming 2005 honors Joseph Smith and his commitment to learning.

In 1841 in a fledgling frontier city on the banks of the Mississippi River, a young man founded a university with words that would be fulfilled through hundreds of thousands of graduates, though the university itself would never conduct commencement exercises.

The school was the University of the City of Nauvoo; its founder, Joseph Smith Jr. 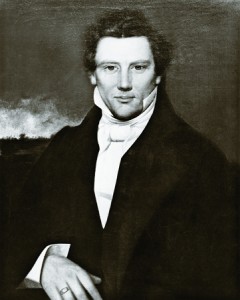 Although he died 31 years before the establishment of Brigham Young Academy, the Prophet Joseph Smith left educational ideals and a legacy of learning that are central to the university and its mission. Photo Courtesy L. Tom Perry Special Collections, Harold B. Lee Library.

In a First Presidency proclamation, Joseph Smith, Sidney Rigdon, and Hyrum Smith said the university “will enable us to teach our children wisdom, to instruct them in all the knowledge and learning, in the arts, sciences, and learned professions. We hope to make this institution one of the great lights of the world, and by and through it to diffuse that kind of knowledge which will be of practicable utility, and for the public good, and also for private and individual happiness.”The school in Nauvoo did not last long enough to fulfill its charge, but its mission and legacy were powerful. Saints who left Nauvoo and came to Salt Lake City infused that vision into a number of educational institutions, including Brigham Young Academy and its successor Brigham Young University.During Homecoming 2005 BYU will honor Joseph Smith Jr. and will celebrate the Prophet’s contributions to promoting educational ideals.“Joseph Smith’s vision of spiritual and secular education is fundamental to the purpose of BYU and gives meaning and life to each of us who unite as a BYUcommunity,” says John C. Lewis (BA ’77), associate academic vice president of alumni and external relations and executive chair of the BYU Homecoming Committee.Though he had little formal education, Joseph Smith, schooled by Moroni, received a deep education that would help instill in him a powerful passion for learning as he translated the Book of Mormon. As described by Elder Neal A. Maxwell, “The young man’s keen mind was awakened and expanded as the tutoring words of the Lord and of past prophets flowed through his quickened consciousness.”President James E. Faust added, “For him, the Spirit had to be the teacher, and translating the Book of Mormon provided the schooling. The translation process taught the unlearned young man from New York essential lessons which were vital for his call as the prophet of the Restoration. As the Book of Mormon operates as the ‘keystone of our religion,’ so the process of translation was the keystone of the Prophet’s education.”The Prophet’s education expanded as he oversaw the architectural design and building of temples in Kirtland, Ohio, and Nauvoo, Ill., and as he served as a general, mayor, editor, leader, and university founder. Additionally, many of the revelations he received, now published in the Doctrine and Covenants, highlighted the importance of education. One such revelation, which he received in 1843, teaches,Whatever principle of intelligence we attain unto in this life, it will rise with us in the resurrection.And if a person gains more knowledge and intelligence in this life through his diligence and obedience than another, he will have so much the advantage in the world to come. [D&C 130:18–19]Until the moment of his martyrdom, Joseph Smith continued to seek and promote knowledge and to espouse the significance of education and progression. He left a legacy of learning with the completion of the Book of Mormon and Doctrine and Covenants and through his instructions for a number of sacred ordinances. The Prophet also left a clear rationale for attaining knowledge and education with the promise, “Knowledge does away with darkness, suspense, and doubt; for these cannot exist where knowledge is.”

How we can learn from the way Joseph Smith dealt with the temptations of evil.

Letters between Joseph and Emma Smith show their close relationship and deep faith.

A Vision of Teaching

Jan Zollinger has transferred her passion for learning to generations of blind children.