We know of only five surviving letters of Emma to Joseph, and they are all the more precious because she left no diary and few other personal letters written before the martyrdom. Such firsthand insights into her personality are quite rare.

The great question about Emma is why she endured 17 years of constant adjustment and danger at the Prophet’s side. The answer is that she obviously shared his spiritual commitments in order to share his persecutions. Emma’s letters reveal she did not suffer merely for Joseph or, in the worst scenario, because of Joseph; in reality she suffered with Joseph because she believed in his integrity and the revelations he published to the world.

No year was more stressful to the Prophet than 1837—it began with the failure of the Kirtland Bank, and it ended on the eve of his forced exodus from Ohio to Missouri. Murmuring against Joseph’s leadership, doctrine, and policies was at its height, and outside persecution descended on Joseph. Anti-Mormon businessman Grandison Newell filed a criminal complaint against the Prophet for threatening his life. Joseph Smith appeared personally in May–June hearings that resulted in acquittal.1 But as the case came on, the danger of lynching was so real that the Prophet left suddenly to defuse the situation. Joseph wrote home immediately, though this message does not survive. In turn Emma wrote twice, expressing deep love for her husband and also hope for their worthiness for God’s protection. Her April 25, 1837, letter states:

I cannot tell you my feelings when I found I could not see you before you left. Yet I expect you can realize them. The children feel very anxious about you because they don’t know where you have gone. I verily feel that if I had no more confidence in God than some I could name, I should be in a sad case indeed. But I still believe that if we humble ourselves and are as faithful as we can be, we shall be delivered from every snare that may be laid for our feet.2

Emma’s 1837 letters show deep respect for her husband and reflect her reliance on the Prophet’s consistency as a parent and husband. In her May 3, 1837, letter, Emma uses the word anxiety for missing Joseph and again requests that Joseph return in time to help with the children because they have been exposed to measles, which earlier had robbed them of a child.3 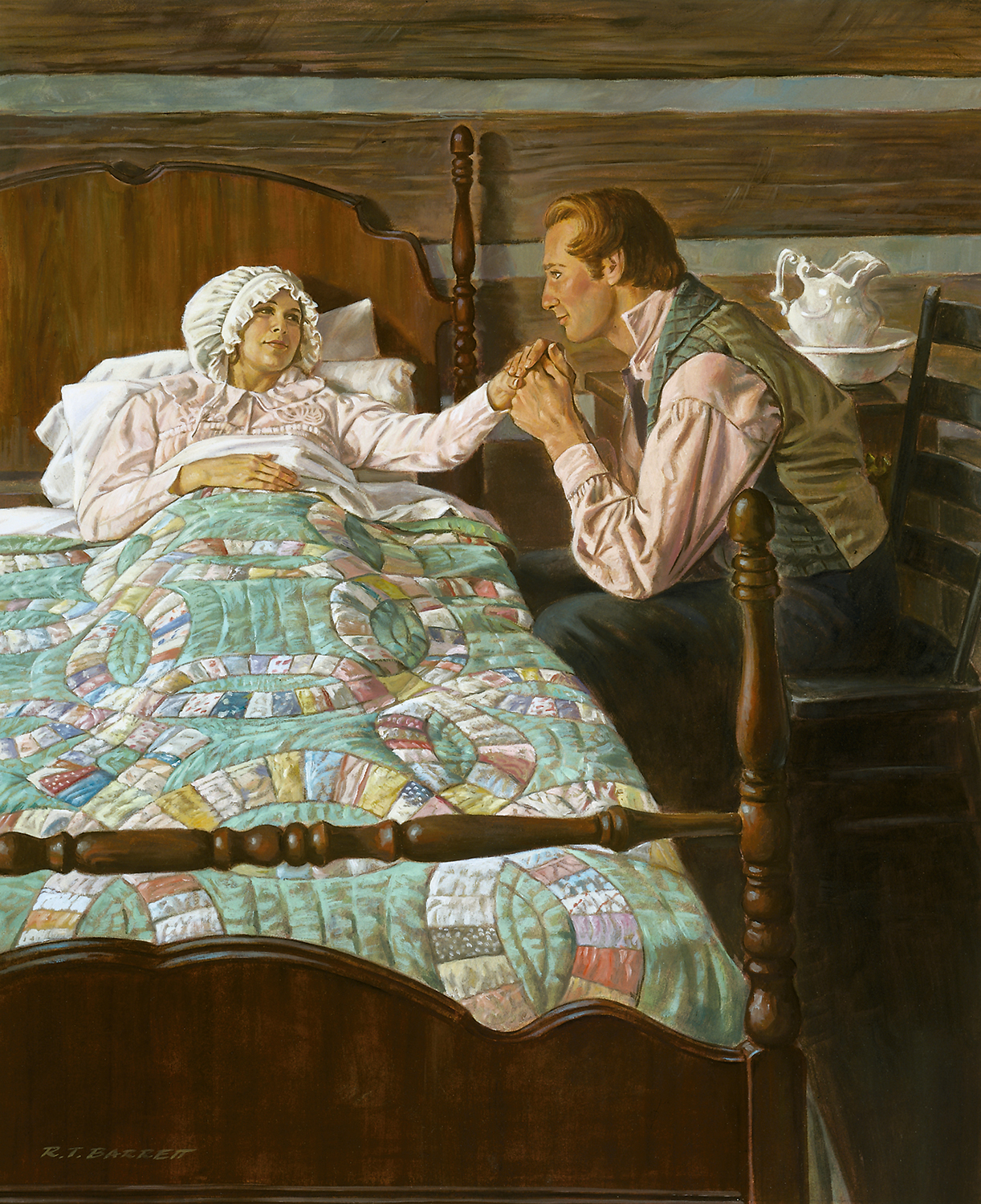 “Joseph and Emma” by Robert Barrett.

Emma’s religious relationship with Joseph was similar to that of other Church members: he testified of his divine experiences, and she believed. But years of intimate observation make her faith highly significant, as when she told her son that she had not “the slightest doubt” of the divinity of the Book of Mormon because she saw the wrapped plates and watched her husband transcend his abilities in dictating the manuscript.4

After the move from Ohio to Missouri, after her husband’s arrest and detention in Liberty Jail, after her winter exodus to Illinois with children across snowbound prairies, and in the midst of her own isolation and poverty, Emma still believed it was all worth it. On March 7, 1839, she wrote to her imprisoned husband: “But I still live and am yet willing to suffer more, if it is the will of kind heaven that I should for your sake.”5

This continuing commitment to Joseph says much about the quality of Emma’s sacrificial love, but it also says much about Joseph’s worthiness. Her pledge to give more is deeply religious. Throughout this early 1839 letter she relies on the providence of God: she says that only He knows her heart, only He can redress their wrongs, and she fully regards her husband as an instrument in God’s hands.

Emma’s letter to Liberty Jail is conceptually the mirror image of Joseph’s communications to her at this period. On March 21, 1839, after nearly five months in custody, he answered her letter: “My trust is in Him. The salvation of my soul is of the most importance to me. Forasmuch as I know for a certainty of eternal things, if the heavens linger, it is nothing to me.”6

Joseph escaped Missouri justice and began rebuilding family life and Church leadership in Illinois in April of 1839. But late in 1839 he felt obligated to take a winter journey of 800 miles to seek Mormon reparations at the nation’s capital. After travelling to Springfield, Ill., Joseph wrote Emma. He could not contain his disappointment of being apart the winter after Liberty Jail, noting that “it will be a long and lonesome time during my absence from you.”7

On Dec. 6 she responded, “and the time lingers long that is set for your return.”8 But the tone of her letter shows that she agreed with the Prophet’s priority of service to God and his people. Though Emma listed endless pressures of major sickness of family and friends, she closed her letter by stressing Nauvoo’s concern that God would bless the Prophet-advocate: “There is manifested great anxiety for you in this place that you may be prospered in the mission whereunto you are sent.”9

Joseph returned to Nauvoo in the spring of 1840 after exhausting all possibilities of immediate federal assistance. There was relative peace until 1842, when intense efforts were made to extradite him on a Missouri charge of being accessory in the attempted assassination of former Governor Lilburn W. Boggs. The Prophet could not risk arrest because of the danger of his own assassination, so Joseph successfully played cat and mouse with arresting officers in the latter half of 1842. In temporary hiding near Nauvoo, he sent Emma contingency plans of escaping with his family to the Mormon lumbering settlements in Wisconsin. Emma answered his letter by agreeing that the conservative course of staying in Nauvoo seemed best. But she committed herself once more to any necessity for the safety of her husband or of the Saints: “I am ready to go with you if you are obliged to leave. . . . I shall make the best arrangements I can and be as well prepared as possible.”10

This contingent, temporary move out of the jurisdictions of Missouri and Illinois sheriffs did not materialize, but the Prophet had poured his soul out to Emma at a tender time. In this 1842 exchange the couple’s closings blend with the temple ceremonies that the Prophet had started to introduce. Joseph ended as “your affectionate husband until death, through all eternity, forevermore.” And Emma finished with, “Yours affectionately forever.” Emma and Joseph were sealed for eternity and received full endowments during the following year.

In these letters Emma and Joseph assert clear spiritual values and strong faith in Joseph’s calling and revelations. Joseph’s spontaneous, intimate expressions of conviction are impressive. In turn, Emma’s letters quietly testify of her faith in Joseph’s religious experiences.

While in seclusion in 1842, Joseph expressed their common faith in the Restoration. A few days after conferring with Emma and six trusted associates about his safety, he dictated his intense gratitude for these visitors in the record he called “The Book of the Law of the Lord.” Emma headed the list as he poured out gratitude to a group who knew his motives and the reality of his profound relationship with God: “These love the God that I serve; they love the truths that I promulg[at]e; they love those virtuous and those holy doctrines that I cherish in my bosom with the warmest feelings of my heart; and with that zeal which cannot be denied.”11

Richard Anderson is a BYU professor emeritus of ancient scripture and a contributing editor on the Joseph Smith Papers project. This essay is condensed from a presentation given Feb. 22, 1992, at the BYU Joseph Smith Symposium. The full text is available in Joseph Smith: The Prophet, The Man, Susan Easton Black and Charles D. Tate Jr., eds. (Provo: BYU Religious Studies Center, 1993).

New biographies acquaint another generation with the Prophet Joseph Smith.

How different would your life be if Joseph Smith hadn't done what he did?