As I prepared for this talk, my testimony of the Prophet Joseph Smith moved from the factual to the very personal. Instead of considering in a general way how different the world would be if he had not fulfilled his mission, I have asked myself—and I am asking you to consider—“But for Joseph, how different would my life be?”

I first heard the name Joseph Smith in 1968, during the summer before my junior year in high school. I had attended a conference with a group of teenage girls, and we were returning from Galveston to our homes in El Paso, Texas. We stopped in San Antonio, and the adults turned us loose for several hours at the HemisFair, an event similar to a world’s fair.

The six of us soon found our way to a pavilion entitled “Man’s Search for Happiness.” When we discovered we had accidentally stumbled into a religious presentation, we tried to exit the side door—but those clever missionaries had locked it! We were stuck, so we feigned attention until the audience moved into the next room and we could escape through some unlocked doors.

When we boarded the bus again, for what was still a long ride home, I noticed that the only piece of reading material I had managed to hold onto during our dash through the fair was a pamphlet with Joseph Smith’s picture on the front. I read through it, motivated only by a need to pass the time, and mentally categorized it as “curious.”

The following spring, in my American history class, I was searching for an engaging topic for a term paper. It was a time when newspaper headlines spoke of civil rights and of atoning for past injustices. As I looked at a time line of the 1800s in one of the reference books, the persecutions against the Mormons captured my attention. I chose to look back at the events that forced this peculiar religious group westward. The name Joseph Smith turned up again as I researched the topic.

Then, one evening in 1970, I sat in my living room and listened to the missionaries present the first discussion. After a brief discussion of the Apostasy, the missionaries reverently explained the Restoration brought about through the Prophet Joseph Smith. They presented in some detail that curious story I had quickly read about in the pamphlet two years earlier. I felt my initial optimism that this church could be my spiritual destination slip away, and doubts crowded into my mind. Did they actually believe that God had appeared to someone just last century? And to a boy younger than I was rather than to a wise, aged prophet?

While I formed my questions, the missionaries moved on to a flannel-board presentation with circles and lines that depicted the plan of salvation. Before long I felt that their explanation was somehow familiar to me, and they had my full attention. I was certain that they were speaking the truth in this part of their presentation, and I felt some hope return. As the missionaries were leaving, they scheduled our next appointment, handed me a copy of The Joseph Smith Story, and asked me to commit to read it carefully and pray about it. I agreed to do so.

Later that night, my roller coaster of emotions hit a low point. As I thought back on all I had heard and felt during the evening, I believed I would cancel the next appointment. But first I decided to keep my promise to the missionaries. After I had read the Prophet’s narrative of the First Vision and beyond, I offered up an awkward, short prayer. Sleep came quickly, so I was not left to ponder the message for long. 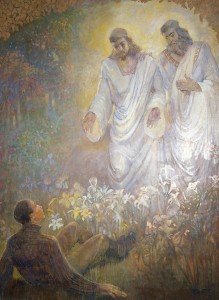 The next morning, as I knelt again in prayer, I found that the Spirit had eased my doubts about Joseph Smith’s account and confirmed the truths of which he testified. I kept the appointment with the missionaries, and that decision has made all the difference in my life. But for Joseph, I would not have found my spiritual home in the restored gospel of Jesus Christ.

In a space of approximately 24 years, the Prophet Joseph accomplished much that has eternal, historical, and personal implications for each of us. As I list here four of his contributions that have particular meaning in my life, I encourage you to make your own list.

1. Joseph Smith opened up communication with the heavens.

Because he was willing to ask God directly, the Prophet Joseph—and each of us through him—learned eternal truths. But for the Prophet Joseph’s experience in the Sacred Grove, I would not have an understanding of the loving nature of God and my literal claim to divine heritage, described in Doctrine and Covenants 25:1: “All those who receive my gospel are sons and daughters in my kingdom.” The God I had learned about before I accepted the gospel was removed, ever-judging, and powerful. However, I had an experience as a young child that was not consistent with this unapproachable image of deity. At that time I was living in rural Arkansas. Because I had no brothers or sisters, I had adopted an agreeable farm dog as my constant companion. One afternoon as we were walking home along a single-lane road, I watched in horror as she was struck and killed by a truck. That night, as I tried to fall asleep, my grief overwhelmed me. Before long that grief turned into fear that I, too, might die suddenly. No one was near enough in the house to console me, so I offered up a prayer, and my pleading was heard. I felt encircled by warm, loving arms and instinctively knew I was being comforted by my Father. As the missionaries explained the nature of a loving Heavenly Father who answered young Joseph Smith’s prayer, my experience 13 years earlier came immediately to my mind and validated their words.

Can you imagine your life without the understanding that the Book of Mormon lends? But for Joseph, we would not have three volumes of scripture. Think how limited our understanding would be if we did not have Father Lehi’s vision of the tree of life. What a loss we would experience if we did not have the opportunity to know Nephi, Alma, Moroni, and others through their own words. How incomplete our view of the Savior’s ministry would be if we did not have at our fingertips the tender account in 3 Nephi of Him ministering to His “other sheep” on this continent. And how lacking our understanding of the creation would be without the accounts recorded in the books of Moses and Abraham. Without the intensive instruction in Church history and covenant-making and -keeping in the Doctrine and Covenants, would we be able to truly appreciate the legacy of our faith’s past and be prepared to serve in the kingdom?

3. Through his persistent and resilient efforts, Joseph Smith brought people to their Savior Jesus Christ.

In this dispensation the Prophet Joseph literally brought heaven closer to earth as he lifted the darkness of apostasy, banished it, and brought to light the Savior’s plain and precious doctrine. But for Joseph, my understanding of the Atonement still would be theoretical and abstract. I would not have the information that tells me that the Savior’s sacrifice was, yes, infinite and all encompassing, but also very specifically for me. Understanding the personal nature and application of the Atonement allows me to know that, after all I can do, my Savior and Redeemer in His mercy can complete my circle of repentance and growth and lift my soul. He can and has changed my heart when no amount of study, willpower, or well-intended advice could affect my need. I am thankful to know that this greatest of gifts can make me, in spite of my weaknesses, more fit for His service.

4. Joseph Smith established the kingdom of God on earth today. 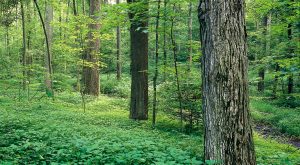 The Sacred Grove, near Palmyra, N.Y. Photograph by John Telford.

Under divine tutelage, the Prophet Joseph organized the Church. But for Joseph, I could not be a participant in the building of the kingdom of God today. Without the fellowship of my brothers and sisters in the gospel, I would not be strengthened and sustained. I can’t imagine my life without the refuge and perspective of the temple. If the sacred ordinances that are performed therein were not on the earth today, I would not have the understanding of eternal marriage that stands firm in the face of trials and challenges. And without the priesthood, and a husband worthy and willing to call down blessings of comfort, healing, and strength upon our family, the world’s “three Ds”—distraction, discouragement, and despair—would never be far away from our door. And without the selfless sacrifice of missionary work, I literally would not be with you today. But for Joseph, the Relief Society would not have been divinely organized. I love this organization and the privilege it affords me to serve with the exceptional sisters of the Church.

We are all eternally indebted to the Prophet Joseph Smith. How do we demonstrate that gratitude? Let me suggest three ways.

1. We can seek to love and honor the Prophet Joseph as we learn more of his life and his mission.

2. We can bear testimony of Joseph Smith’s crucial role in this dispensation.

3. We can serve continuously and faithfully in building the kingdom.

Brothers and sisters, I challenge all of us, at whatever level—even if we are at a very early stage in our journey of faith—to deepen our understanding of the Prophet Joseph and his divine mission, to acknowledge before our Father and all who will listen that, but for the Prophet’s role in this dispensation, our lives would be barren and our hope would fail us.

I speak from personal experience when I say to you that seeking this new level of testimony will not come easily; the adversary will attempt to block your progress. Seeking will require a letting go of pride and the things of this world that confuse and distract you. You will need to make a higher level of commitment to the work that the Prophet Joseph died to further. But all the effort is worth it, and it is essential that we commit ourselves to it.

For me, the strengthening of my testimony of the Prophet Joseph seemed to come together in a single moment. All of the historical and spiritual pieces fell into place as I read the simple, direct statement of the Lord to his beloved servant Joseph—and to each of us—in Doctrine and Covenants 5:10: “But this generation shall have my word through you.”

I have glimpsed his earnest desire, his unstoppable faith, the discouragement he made productive, and his feelings of enveloping joy; and I can now testify, with a conviction born of love for the Prophet Joseph and inexpressible gratitude for his mission, that he is a prophet of God.

Katherine Pullins is associate dean of BYU’s J. Reuben Clark Law School. This essay is adapted from a devotional address given June 27, 2000. The full text is available online at more.byu.edu/standbyjoseph.

Five scholarship recipients share their perspectives on scholarships and their thoughts about BYU.

Letters between Joseph and Emma Smith show their close relationship and deep faith.