See the Cougars on the Mountain 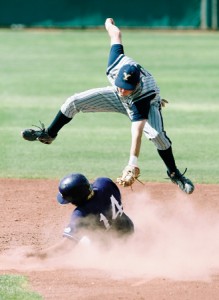 The mtn. TV network will go beyond football, airing more than 200 events a year.

For years BYU fans have grumbled about late start times. The Mountain West Conference’s (MWC) relationship with ESPN required that teams conform to the national network’s scheduling, which often kept fans up late.

Come this fall, however, true blue fans won’t have to watch red-eye games, thanks to a new long-term broadcast deal with College Sports Television (CSTV) and the creation of the MountainWest Sports Network—or the mtn. (verbalized as “the Mountain”). Most BYU football games this fall are scheduled to kick off on Saturdays between noon and 2 p.m., with a limited number of games shown Thursday evenings.

Part of the new CSTV broadcast contract—which goes into effect for the 2006–07 season—includes the creation of a super regional sports network. CSTV will air select MWC games nationally, while the mtn. (set to launch in late summer) will provide tailored content for each of the eight markets in which MWC schools are located.

The mtn. will go beyond just broadcasting more football and basketball—although it will certainly do that (airing 35 football games and 150 basketball games next year). It will also offer more than 200 “Olympic sports” events—from volleyball to soccer to baseball.

“We are going to broadcast more games,” says Craig Thompson, MWC commissioner, “covering more of the 19 championship sports that we support.”

Although the rise of the mtn. will result in the decline of Mountain West sports on local stations, the network will provide a bevy of options for viewing games. In addition to traditional television programming, athletic events will be available through Internet Webcasts, video on demand, podcasts, and wireless networks.

Similar to CSTV, the mtn. will be carried by cable and satellite systems (such as Dish Network and DirecTV). BYU is also working with CSTV to determine BYUTV’s role in broadcasting BYU games in the future.

“Last year there were about 45 live BYU athletic events on television,” says associate athletic director D. Duff Tittle (BA ’90). “With the mtn., CSTV, and BYUTV, that number could double in the coming year. Our goal is to bring the games to the fans, and our new broadcast partners will certainly help us in that effort.”

An alum’s intricate moving sculptures are full of unexpected combinations.