By Jacquelyn Youd Christensen in the Winter 1999 Issue 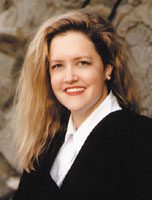 For most of us, a meeting with Michael Keaton or Antonio Banderas means a few hours in front of a big screen. But for one BYU graduate, it means real business.

“Sometimes I forget why I do this job, and suddenly I’m reminded when I have a meeting with Antonio Banderas,” laughs Kate L. Donahoo, ’89, manager of creative advertising for Columbia Pictures and self-described “movie junkie.” She rubs shoulders with the industry’s stars–Melanie Griffith, Will Smith, Alicia Silverstone, Brad Pitt, and the like.

“I heard Harrison will be in tomorrow,” she adds casually.

She says one of her most memorable experiences was “wrangling each individual Spice Girl, trying to get them on stage for a photo shoot.”

Her job gives her glimpses into the lives behind Hollywood faces–such as the day she spent at Barbara Streisand’s Malibu home supervising a photo shoot. Donahoo calls Streisand “a perfectionist. She knows what she wants and she’s demanding for very good reasons. She’s a very intelligent woman.”

Donahoo remembers a phone call at the end of a long day at work. It was Streisand. She was at the sound studio and she wanted to see the progress on her movie poster. Donahoo grabbed the poster and headed for the studio. As she opened the door, she saw and heard Streisand singing with a group of children. Chills up her spine almost made Donahoo drop the poster.

But Donahoo’s job isn’t just wall-to-wall meetings with stars. Some afternoons she kicks back to review a movie that won’t hit theaters for a long time.

And she gets paid for this?

Donahoo readily explains that her job isn’t all perks. It’s mostly hard work. She is part of a team that creates the one-sheets (the posters hanging up in movie theaters), movie trailers, radio spots, television spots, teaser trailers, and other various collateral material. She is the first to admit the hours are horrendous, the stress can be mind-boggling, and the filmmakers can be very demanding.

Donahoo describes how she and the team she is part of begin working on advertising for a movie. As early as two years before the movie is scheduled to enter theaters, the team reads the script. They meet with the filmmakers to get a feel for the movie, which helps them decide what direction advertising should take. Finally, they are ready to start working on the print and audiovisual campaign, including hiring vendors. But this process is hardly sequential, explains Donahoo–the team and vendors are making changes all along the way.

Donahoo says her typical day begins with meetings: with her boss, with various departments, and with vendors. And this is just the beginning. Donahoo has to review photography, trailers, and TV and radio spots. She clears music licenses and stock images for print materials. And she is always checking on legal issues, which she calls one of her biggest hassles. Maybe she gets to meet celebrities, but she works hard for the perks.

Donahoo is certainly successful at what she does: she won the First Place Key Art Award in comedy TV spots for copywriting on the Men in Black advertising campaign and is nominated for what she calls the Academy Award for outdoor advertising for her involvement in the Godzilla campaign.

And Donahoo definitely isn’t afraid of work: that’s how she got to Columbia Pictures. Sitting in a marketing class at BYU, she thought, “This is it. This is what I want.” After graduation she started with a job in an ad agency but decided she wanted more. Having grown up in the L.A. area, she had been surrounded by the movie culture. She decided to blend her love for movies with advertising and seek work at a studio. “Through perseverance, drive, and extreme focus, I made it happen.”

Where will she go from here? “Running Sony studios,” she ponders with a smile.

As a BYU student, she read the big names in film credits, but now she reads them on her daily agenda. Does the edge of excitement wear off after being around so many acting greats? Kate says no. “Your jaw still hits the ground when you see them for the first time– usually because they are so much shorter than you expect them to be. But their presence is still amazing.”

Clayson won a regional Emmy for a report from China about Utah doctors assisting children with disabilities.

Schlappi had proven to himself that people with physical disabilities can still be world-class athletes.