At the beginning of the 20th century, scientists studying evolution had advanced little beyond Rudyard Kipling’s fictional tales of “how the leopard got his spots” or “how the camel got his hump” when trying to illuminate the diversity of features in the animal kingdom. In recent years, scientists using advances in molecular genetics have explained how butterflies got the “eye” on their wings and how snakes lost their legs.Now Brigham Young University researcher Randy L. Bennett has added another story, this one published not in a children’s book but on the cover of one of science’s most prestigious journals. He has discovered “how insects lost their legs.”Most of their legs, that is. Of course, insects—the class of creatures that includes flies, beetles, fleas, mosquitoes, and bees—have six legs on the middle region of their bodies. But fossils reveal that today’s insects descended from animals that looked much like modern centipedes—many-legged critters with limbs along their entire bodies.Over millions of years, those ancestral animals specialized, and all but those six legs vanished. By unraveling the biological processes behind that disappearance, Bennett has been able to turn back the evolutionary clock and tweak a developing beetle so it grows many legs like a centipede.“One of the basic questions in evolutionary biology involves how different structural body plans evolve over time,” explains Bennett, whose study appeared in the April 25, 2000, issue of Proceedings of the National Academy of Sciences.“What got my adrenaline going was finding an approach that would allow us to ask a specific question concerning this problem and get a specific answer.” 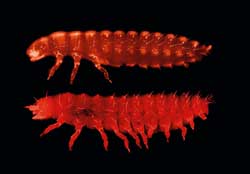 A regular flour beetle larva (top) has only six legs, compared with the many-legged version engineered by zoology professor Randy Bennett. By managing genes in the beetle embryo, Bennett has been able to turn back the evolutionary clock to a time when beetles’ ancestors had many legs.

An assistant professor of zoology, Bennett practices a new branch of science called evolutionary developmental biology, or evo-devo. He and his colleagues study differences and similarities in the way organisms develop from embryos to adulthood—over time, those differences add up to evolution. Evo-devo opened up about 10 years ago with the discovery that a cluster of genes important for development in flies is also important for humans, bugs, mice, and even small parasitic worms. Called “Hox genes,” they serve as a master control panel, turning other genes on and off, and are involved in many of the cell divisions in the regions they control. Changing Hox genes during development can cause dramatic transformations in an animal’s eventual structure.“The question was, what happened evolutionarily to change insects from having lots of legs to having only six legs?” says Bennett, explaining that fewer legs and the addition of wings are probably two of the more important events that have made insects such successful organisms. He points out that centipedes and millipedes are typically found under rocks or logs: “You don’t see them just everywhere, whereas insects we do see just everywhere. So there seems to be an advantage to having wings and six legs.”From previous scientists’ work with fruit flies, Bennett knew that two Hox genes, abdominal A (Abd-A) and Ubx, had something to do with limb development in insects’ abdomens. However, because flies are highly specialized insects, he chose to perform his studies on more primitive insects—flour beetles. When he removed just the Ubx gene, the beetles still had no abdominal legs. When he removed just the Abd-A gene, the beetles grew limb-like stubs on their abdomens, but no legs.Until recently, it was difficult, if not impossible, for scientists working with beetles to study the effects of multiple mutations in genes that are close to one another on the same chromosome. But using a new technique developed by scientists at the University of Massachusetts and the Carnegie Institute, Bennett injected a strand of RNA that invaded the beetle embryo and neutralized both target genes.“And then we got legs everywhere,” says Bennett, who was assisted on the study by David L. Lewis and Mark DeCamillis of the University of Wisconsin. “When we saw all those legs, we were jumping all over the lab.”The natural blueprints for abdominal limb development are still present in insects, Bennett explains, but the gene Abd-A has evolved to turn off those instructions. At the same time, Ubx has evolved to modify any abdominal limbs into something else. Taking out the activity of both genes caused the beetle embryo to return to its ancestral tendency and sprout legs on each segment of its body.The discovery yields as many questions as answers.“The black box, or great unknown, in evo-devo is what really causes the morphological (structural) changes. Now we know the role of Hox genes in controlling limb development, but we don’t know what brought about the changes in the roles of these genes,” Bennett says. “We can see why insects can’t make abdominal legs today, but we don’t know whether they lost legs and then these developmental features solidified that, or whether these developmental changes happened first.”That pursuit is Bennett’s new quest, and he acknowledges with a smile that poking around beetle and fruit fly genes isn’t the most glamorous route a scientist can take. But unveiling more of nature’s mysteries is motivation enough for him.“We just get to understand a little bit more about how life develops over time. What used to be a huge black hole in our knowledge is now a little smaller,” he says.The issues Bennett deals with are already moving to the fore as private companies and the federal government’s Human Genome Project race to identify and assemble the billions of genes that regulate our bodies. Since humans’ Hox genes are remarkably similar to those of lower organisms such as the beetles and flies studied by Bennett and his colleagues, their discoveries can serve as early warning systems and models for human biologists as they attempt to nail down the function of human genes.For instance, gene therapy holds the prospect of blocking or otherwise changing a human gene to prevent a disease before it occurs. But Bennett’s beetle study and others show that networks of genes—not single genes—control life’s functions.“If we don’t understand how these genes can talk to one another, we assume that Gene A can only talk to Gene B, and we don’t think about how Gene A can talk to Genes C, D, and E,” he says. “When we change it and reinsert it, we may find out that we correct problem A, but we may cause problems C, D, and E.”The contribution of evolutionary developmental biology, Bennett says, is demonstrating the “diversity of gene functions, which will make us more cautious as we step farther into the unknown.”

A Leg Up to Mt. Kilimanjaro

At an Emeriti event, Chad Lewis recounted his hike up Mt. Kilimanjaro with Wounded Warriors.

At Home in Nauvoo

Students in the Nauvoo program become familiar with the details of the structure as well as its purpose and history.