A Leg Up to Mt. Kilimanjaro 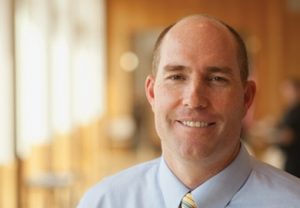 At an Emeriti event, Chad Lewis recounted his hike up Mt. Kilimanjaro with Wounded Warriors.

During part of a rigorous seven-day Mt. Kilimanjaro trek in May 2011 for the Wounded Warrior Project, BYU associate athletic director Chad W. Lewis (BA ’97) carried the prosthetic leg of veteran Ben Lunak, who could not continue after his artificial limb began tearing and inflaming his flesh.

Former New England Patriots linebacker Tedy Bruschi had grabbed the leg, declaring that at least part of Lunak would reach the 19,300-foot pinnacle in Africa. When it became too heavy for Bruschi, he handed it off to Lewis.

“Reaching the summit was hard enough,” Lewis told an audience of BYU emeriti at their annual winter activity. “We began in a jungle, continued through a rain forest, traveled on the desert plains, and ended at the snow-covered Uhuru [Freedom] Peak. But the trip down was 100 times more difficult.” Eventually Lewis passed the leg on to another hiker.

The experience of carrying Lunak’s leg reminded Lewis of the Savior. “If we cast our burdens upon Him—no matter how difficult they are—He will carry them and walk with us. It was a profound moment when I really felt the love of my Savior.”

Lewis is accustomed to climbing metaphorical mountains. He began his BYU collegiate football years as a walk-on and his nine-year professional football career as an undrafted free agent. This time the mountain was the largest in Africa.

He agreed to embark on the arduous trek to call attention to the Wounded Warrior Project, a non-profit organization designed to help servicemen and servicewomen who have been seriously injured during military service. Jeff Fisher, former Tennessee Titans head coach and current St. Louis Rams head coach, joined Lewis and Bruschi to accompany four Wounded Warriors up the mountain.

“The adventure launched the Wounded Warrior ‘Believe in Heroes’ campaign for our true heroes,” Lewis said. The trip heightened his appreciation for the sacrifices made by members of the U.S. military—an appreciation he hoped to pass on to his emeriti audience.

BYU employees joined forces with the community in a day of service.