Jerome wants Mike to meet his new friend, Mr. Cigarette. “He’s really cool, Mike, and he wants to be your friend, too,” Jerome says. Mike doesn’t like Cigarette because Cigarette has other friends like Smoke, Tar, and Addiction, who make it hard to breathe, paint his lungs black, and hold him really close. 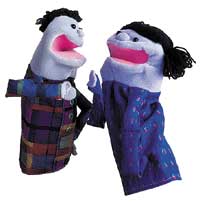 Slime Germ (below left), Addiction (below right), and the people puppets above were designed at BYU to use worldwide in health fairs sponsored by the Thrasher Research Fund.

“I don’t want to have anything to do with you and your cigarette friends,” Mike says to Cigarette. So Cigarette, Smoke, Tar, and Addiction decide to find someone else to befriend. “People are so easy to fool,” they smirk.

These characters are the stars of a series of puppet shows created at BYU to teach tobacco avoidance, alcohol avoidance, nutrition, and hygiene. The shows are part of a health fair developed and financed by the Thrasher Research Fund, an organization administered by the LDS Church to promote child health research, in cooperation with the Humanitarian Service Division of the LDS Church’s Welfare Services Department.

The health fair includes a portable picture display tower, puppets and stage, and discussion aids. Pilot versions of the fair have been or are currently being presented by LDS humanitarian and proselyting missionaries and local volunteers in South Africa, Ukraine, Belarus, Armenia, Zimbabwe, and Guatemala. The tobacco unit of the fair was also presented at an international conference in Beijing.

The puppet shows for the fair were created at the invitation of the Thrasher Research Fund by Harold R. Oaks, BYU professor of theatre and media arts. Oaks and his students have written the scripts, created the puppets, recorded the soundtracks, and designed the stage used in the fair. “It’s really a lot of fun to work with, and it gives us a chance to make a difference in a very real way,” Oaks says. The puppets are handmade at BYU, and the scripts are recorded on campus. Using BYU students and other native speakers, the scripts have been recorded in English, Spanish, Ukrainian, Russian, Armenian, and Mandarin Chinese. 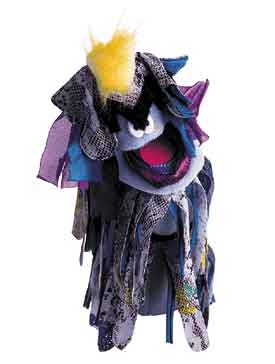 Oaks became involved with the project because of health-related puppet shows he created in 1976 and 1977 with LDS Welfare Services in Samoa, Fiji, and Tonga. Years later, when the Thrasher Research Fund decided to develop health fairs that eventually may be deployed around the world, they turned to Oaks and his puppets.

Puppets are extraordinarily effective with young audiences, Oaks explains. “A puppet can tell somebody things that you couldn’t tell them as a person. Part of the original concept was to make abstract ideas concrete. By taking addiction, which is an abstraction, and making it a negative character, we immediately get the idea across.”

The puppets are designed to be appealing and appropriate in any culture. Nearly all the human puppets have green skin and black hair. Slime Germ has villainous eyebrows and is covered with fluttering scraps of black, green, and purple cloth. The alcohol avoidance module features a bright red Healthy Liver and a splotchy black Sick Liver. And Addiction is portrayed by a glittery, fuzzy, octopus-like creature with a seductive female voice. “If you’re going to get the idea across, the puppets have got to be interesting enough that they’re going to hold the children’s attention,” Oaks says.

A preliminary version of the fair, centered on tobacco avoidance, was taken to South Africa in 1996. Oaks then began working on additional shows that teach nutrition, hygiene, and alcohol avoidance. Like the tobacco avoidance module, these were first tested in South Africa and have since been presented in other countries. 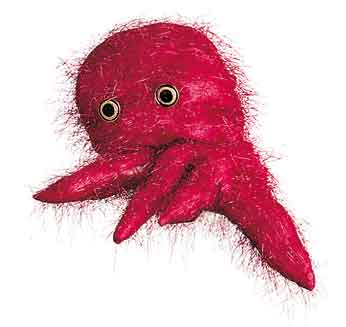 As of October 1998, more than 167,000 people (mostly school children) had viewed the health fair. The fair has been set up in hospitals, malls, marketplaces, parks, orphanages, summer camps, and schools. “The missionaries present the shows anywhere they can get a group of people together,” Oaks says, but schools are the primary venues. In most cases, two volunteers act as puppeteers and two others discuss the health concepts before and after each show. The fairs give LDS missionaries and local members an important community service opportunity.

In many areas, local agencies have teamed with health-fair volunteers to support the fair. In South Africa, for example, the Cancer Society helped volunteers make appointments to present the health fair, and a school district manager gave permission for the fair to be shown in all of the more than 100 schools in her district. In Belarus a health-fair performance was broadcast on national television, and the Department of Education invited missionaries to present the fair at summer camps and at all 250 schools in the capital city, Minsk. In Ukraine the Red Cross provided a car and driver to transport the fair.

“The fair has been enthusiastically accepted and has been successful at carrying important health messages to large numbers of people,” Oaks says.

A missionary serving in Belarus wrote: “We close by asking the group if they 1) have a desire to smoke or drink after seeing our presentation, and 2) if they will ever in their whole lives try drinking or smoking. Some of the best feelings that I have ever had in my whole life have come when I ask those questions after doing everything that I can to present our message in a way that the kids will respond to, and they scream, ‘NOOOO!!'”

The project has been enjoyable and fulfilling for its creators, too. “The potential of reaching hundreds of thousands of God’s children with messages that can improve their lives is what most people dream of doing,” Oaks says. “I feel blessed to have the opportunity to use my meager talents in such a unique way to bless the lives of others.”

Thanks to a 1991 discovery by a BYU associate professor of chemistry one of the decisions you might make got easier.