By Peter B. Garder, ‘98, Associate Editor 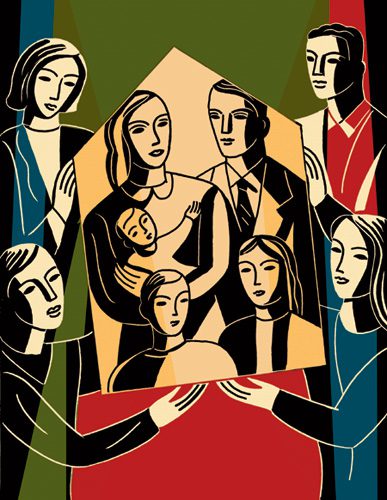 One of BYU’s newest General Education courses and its companion textbook help students of the family – from scholars to spouses – deepen their understanding, enhance their relationships, and embolden their advocacy. 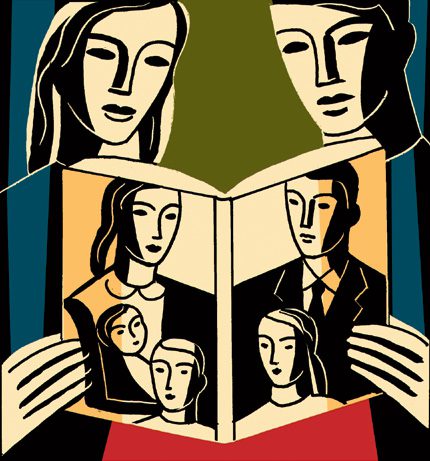 “I’ve realized that first we need to strengthen our own family, and then we need to help other people do the same.” – Noel Hinton

Maribeth C. Clarke, ’80, an associate professor of family life and an author of a chapter on the home, welcomed the students’ suggestions. “Seeing the way they were thinking channeled your writing in a different direction,” she says.A validating moment came on Sept. 10, 1998, at the inauguration of the new School of Family Life at BYU, when Acting President of the Quorum of the Twelve Apostles Boyd K. Packer, ’62, encouraged faculty members to use the proclamation as their foundational document. He further charged them to create, without apology, texts melding spiritual truth with the best secular research on the family.“That’s exactly where we were headed,” says Dollahite. “We had all come to the same conclusion.”So much effort by so many authors for so little recompense and recognition, says Dollahite, was a great sacrifice. “Many of my colleagues put in a lot more time, energy, effort, and blood, sweat, and tears for their chapter for the proclamation book than they do for their scholarly writing,” he says. “They did it out of love for the students and love for the proclamation.”Strengthening Marriage and Family“How does understanding these common challenges that face newly married couples help us go forward with faith in marriage?” Professor Klein asks near the end of a lecture on the importance of creating stable, lasting marriages.After a moment’s hesitation, five or six hands, many adorned with rings on the third finger, rise.“Well, I’ve been married for about a year, and some things have been hard,” one student offers. “But knowing that most couples face similar frustrations and can work through them is encouraging.”Another responds, “I’m not married yet, but I think trying to live the principles of the proclamation could help me avoid, or at least minimize, many of these problems in marriage.”Class discussions, readings, and projects are all based on a three-pronged goal for students: to increase their understanding and testimony of proclamation principles, to move forward with faith in their familial relationships, and to share and defend the truths they learn.Professor Newell, who teaches a section of the class, sees the class as an ideal forum for learning about family issues. “There’s no other place where you can get this cutting-edge family research along with an excellent overview of what prophets have said and see how they complement each other. It’s marvelous,” he says. The book contains some 800 references to scholarly studies that support the words of the prophets. 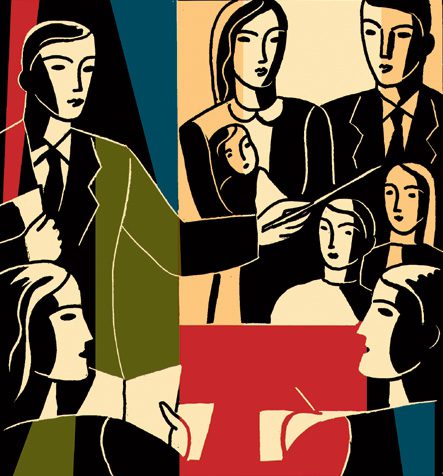 “To have an opportunity to influence students about their marriage and family – which are going to alst them forever – is a huge responsibility.” – Shirley R. Klein.

Based on readings from the book, discussions in class help students move forward with faith in every season of family life, from advising them on the crucial marriage decision to tackling debilitating social epidemics to suggesting ways to reclaim wayward children to encouraging wholesome family traditions.“To have an opportunity to influence students about their marriage and family–which are going to last them forever–is a huge responsibility,” says Klein.Megan Boyer Overton, ’00, an MFHD major, persuaded her business major husband, Ryan M. Overton, ’02, to take the class with her. “The readings provided us with a good opportunity to get together on how we felt about these things,” she says. As parents of one daughter with another on the way, they created a parenting inventory of ideas distilled from the book and class as a joint class project.Ryan says he never considered selling the book back. “We’ll probably use it as we get older. It’s a reference guide; it’s something you can use your whole life.”The class emphasizes other family relationships as well. Tyler J. Livingstone, ’02, an MFHD major from Los Angeles, felt inspired by the proclamation’s emphasis on forgiveness to resolve a long-standing miscommunication with his father. “It’s been really good,” he says. “I’d been thinking about fixing the relationship, but the class was the impetus.”Sharing and defending the truths of the proclamation has become a major thrust of the class. “We want students to emerge with greater confidence in their ability to communicate what they believe,” says Hawkins. He says that the scholarly support for the proclamation provides students with “a language that is persuasive and that establishes commonality rather than builds a barrier of sectarianism.”From class projects to essay questions on tests, instructors challenge students to consider ways to expand the proclamation’s influence among their family, friends, and community.“We try to bring it to a personal level,” says Klein of student projects to share and defend the proclamation. “Students have written a letter to a senator or an editor. Or a student might try to convince a friend who’s thinking about moving in with a boyfriend to do otherwise.”“Our hope is that they take this to their businesses, church groups, and community organizations as strong advocates for families and moral principles,” Newell says.“It’s not a proclamation to the Mormon families of the world. It’s a proclamation to the entire world,” says Hinton. “I’ve realized that first we need to strengthen our own family, and then we need to help other people do the same.”To determine the class’s effectiveness on these fronts, the instructors conducted a survey at the end of the course and were excited by the students’ answers. More than 75 percent of the students said that they feel more confident in their ability to build a strong marriage and be a good parent because of the class; nearly as many responded that the class had increased their confidence in their ability to share and defend marriage and family in secular settings; and 97 percent said they were likely to recommend the class to friends.This success has the teachers and School of Family Life looking for ways to extend the class’s reach. Accordingly, the course listing in the class schedule is becoming more conspicuous as sections are added and teachers trained to meet increasing demand. Also, this spring the class was granted general education status as a social and behavioral sciences elective, and the administration is exploring the possibility of making it available online. The class has even been exported to Rexburg, Idaho, where it will be taught at BYU–Idaho for the first time in fall 2001.For those involved with the class and book, the importance of the proclamation justifies the monumental effort that went into creating them. “I think this is one of the most important things BYU has done,” says Newell. “It’s the kind of thing BYU ought to be doing.”

No graduation ceremony? No problem. This BYU graduate is “rolling” with it.