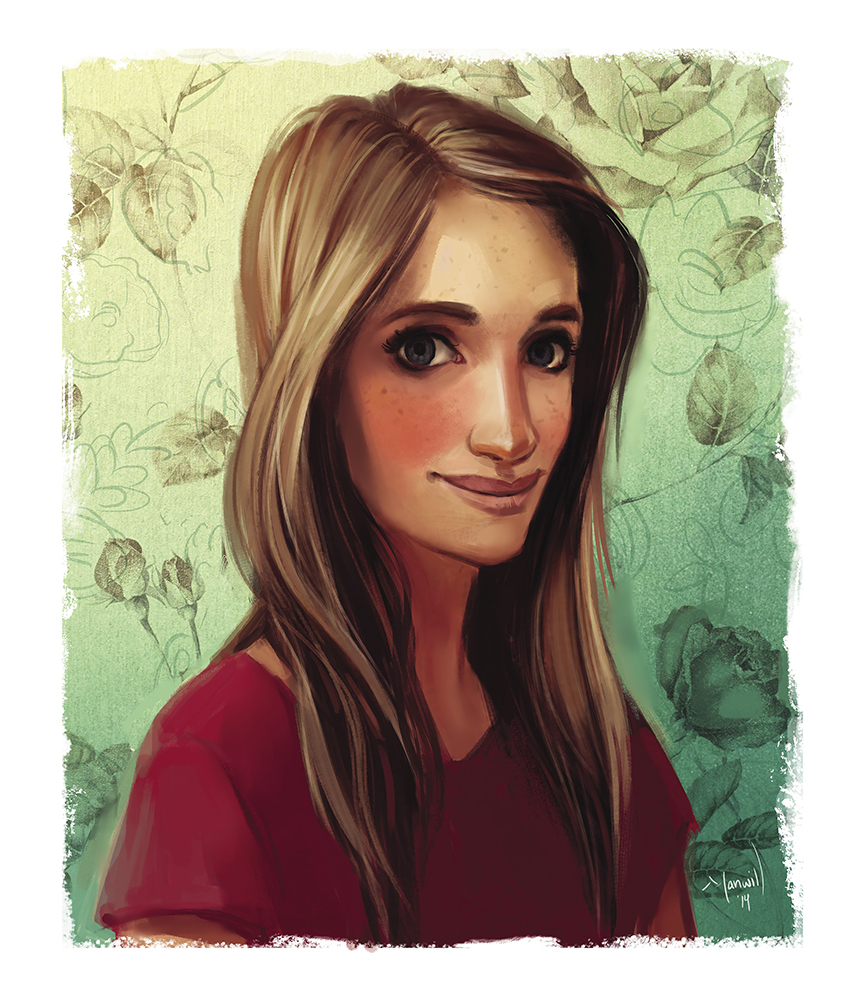 Melissa Manwill (here in a self-portrait) encourages literacy through her art.

Everything was set for illustration student Melissa A. Manwill (’14) to begin school at another university. But a phone call changed all that. Robert T. Barrett, head of the illustration program at BYU, was offering Manwill a donor-funded scholarship in art. “I cancelled everything,” Manwill remembers. “I had an apartment. I had classes. I just ditched it. I came [to BYU], and I haven’t regretted one second of it.”

Manwill has made quite a mark during her time at BYU, particularly in using her craft to help others. She has been the art director for two national projects promoting education: One, for the Library of Congress, involved illustrating fairy-tale characters for a computer game to encourage literacy (see “The Synergy Shop” on p. 8 of this magazine). The second, funded by a $2 million National Science Foundation grant, is an alternate-reality game intended to boost interest of adolescent female and minority students in science, technology, engineering, and mathematics.

Education is a common theme in Manwill’s artistic endeavors, and she says stories are an effective way to get students excited about learning. “We live by stories,” Manwill says. “It’s like a common denominator so we can all communicate. It’s a great way to share simple truths because you can usually wrap a truth in a story.”

During her junior year, Manwill created the Children’s Literacy Project, organizing a group of 12 illustration students to share classic stories like Cyrano de Bergerac and Treasure Island in a graphic novel format. The project was supported with more than $25,000 in BYU grants; finished spreads from the graphic novels were displayed in the Harold B. Lee Library in 2012 and 2013. “She’s just ultra-motivated,” Barrett says. “It can be contagious with other students that come into proximity with students like Melissa. . . . I’d like to bottle that [motivation] and pack it around to my colleagues.”

Through illustration Manwill hopes to open the world of reading to young people who may otherwise not be interested. “If you can pair writing with beautiful visuals that capture the nucleus of the story, you can shed light on the message and give it a deeper meaning,” she says. “That’s what illustration means: to illuminate.”

After completing her senior project—an illustrated story based on the board game Candy Land—and graduating, Manwill hopes to continue sharing stories through illustration. “I feel like those scholarships were an investment in my entire future: who knows where I’m going to end up,” says Manwill. “It’s like a seed that’s been planted. . . . I hope it’s a big tree.”

Portrait of an Artist

Drawing from his experience as a new husband, a painter finds a spot in Washington, D.C.

A Jig for Scotland

A student celebrates the culture of her homeland with her feet.

Paul Gabrielsen reads his award-winning essay about Rex Lee at the opening ceremonies of Homecoming 2008.