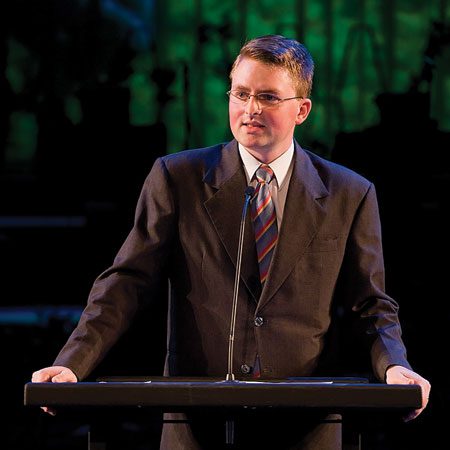 Near the end of his life, Rex Lee was preparing to argue his 60th case before the U.S. Supreme Court. In my mind’s eye, I can picture a yellow legal pad, covered with scribbled notes, carefully laid on a table in a now-silent hospital room. Other books and folders make up an improvised law library among the IV tubes and monitors. The stilled medical equipment is a reminder of the vicious cancer that took President Lee’s life. But as I imagine this scene, I don’t focus on the tubes and wires as much as on his books and his legal pad. I don’t see the way he died; I see the way he lived.

Both his death and his life are commemorated in the annual Rex Lee Run, a race I ran in 2007. As I started my determined jog around BYU campus, I picked a landmark ahead of me and decided that once I reached it, I could slow down and walk for a few minutes. At the first landmark I had enough energy to keep going. So I set a new landmark. And then another. Soon I
was in a steady rhythm. My measured breaths kept time. Landmarks came and went, and somehow I always had just enough in me to make it one more block, one more corner. It was the farthest I’d ever run without tiring out. I found the energy I needed to go the distance.

Rex Lee found that energy, too. As a marathon runner, President Lee “went the distance” every time he crossed the finish line. But going the distance against cancer meant that the finish line was chasing him, and he would have to run as hard as he could before it caught up.

Maybe President Lee’s first experience with cancer turned his thoughts toward working for a world that would go on without him. After his initial diagnosis in 1987, he immediately started planning for his family’s long-term financial survival. Five years later, as BYU president, he pled with students to streamline their graduations and allow more people a BYU experience. He started a fund-raising program that raised $400 million for the university, though he knew he might never see its completion. Years before, as founding dean of the J. Reuben Clark Law School, he worked to recruit top law students, knowing that the law school’s long-term reputation would be built on that first class. He may never have run a relay, but he certainly knew these efforts would affect future generations to which he would pass the baton. Others were depending on him to go the distance.

As his illness recurred, though, it reduced his physical capacity. Going the distance now meant fighting against his limitations with optimism and determination. He stayed at the office through days of tremendous pain. As his legs weakened, he knew that he might never run, jog, or even walk again. But even that would not stop him. “If Jason Hall [a BYUSA president who used a wheelchair] can do his work from a wheelchair, why can’t I?”

Despite everything cancer tried to take away from him, President Lee could not rest. During his treatments he continued legal work from his hospital bed. Justice Sandra Day O’Connor remembered him appearing before the Supreme Court during his 1987 treatments “looking very pale and weak. . . . but nonetheless, [he was] effective.”

Even in his last months Rex Lee knew he could not slow down in the final lap of the race. His yellow legal pad shows that up until the very end he was still setting landmarks and running for them as if nothing was holding him back. Had he lived to argue his 60th Supreme Court case, I imagine he would have started work on his 61st. With the finish line approaching, he kept up the pace he had maintained his whole life.

The finish line was my last landmark of the Rex Lee Run. I was tired, but the end was in sight. Just as before, I found the strength I needed to turn the final lap into a sprint. With all I had, I tumbled past the finish line, dizzily staggered toward my wife in the stands, and knew I had gone the distance.

The time finally came for President Lee to set down his legal pad and cross the finish line. In spite of physical weaknesses, he managed to sprint to the very end, leaving behind much more than a legal pad. Rex Lee’s life is an inspiration to all of us still running. We can make it.

We can go the distance.

President Gordon B. Hinckley has been a wise counselor and steadfast friend for BYU and its students for over 50 years.

Freshman at BYU hasn't picked a major, but what he has done is started a successful game company.

Life and Death on the Trek

Pioneer Trek was certainly no walk in the park, but more pioneers survived the hardship than you might've thought.