Joseph Lytle tests the entrepreneurial waters with a game for the whole family. 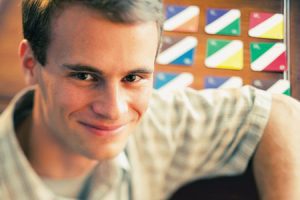 Many college students get through school by working various campus jobs, treating their positions as janitors, receptionists, and landscapers as pit stops on the way to something better. As a freshman, Joseph C. Lytle (’13) had different ideas. Now he’s running his own game company, despite the fact that he hasn’t even chosen a major.

“I had an idea for a game and decided to take my first few semesters at BYU to learn some basic skills to help me make that idea into a reality,” says Lytle. “I signed up for some basic advertising, accounting, and business classes and figured I’d decide on a major after that.”

At last check, physics was battling mechanical engineering for his future study focus. The game thing, though, has progressed with a little more clarity.

Lytle’s game, Circle Out!, recently won the Major Fun Award, given to games that, according to majorfun.com, are “original, well-made, make people laugh, and are easy to understand and teach.” Previous winners of the award include mainstream games like Catch Phrase and Apples to Apples.

The idea for Circle Out! is rooted in the Philippines, where Lytle served his mission. He was struck by the poverty and the threat of inflation, and he wondered what would happen if the currency failed. Upon returning from his mission in 2008, he created a card game to visualizehow trade without currency might play out.

“Let’s say I have bananas and need apples, and you have apples but need grapes,” says Lytle. “In order to trade we would need to find a third person who has grapes and needs bananas.” Using colors on cards, the game replicates this pattern of circular trading.

Ironically, Lytle has never been much of a gamer himself, but when he does play, he prefers games based on skill instead of luck. His own game is based on patterns and principles of economics and mathematics, but that doesn’t mean Circle Out! is complicated. “Circle Out! is simple enough that children can play it,” he says. “My 7-year-old brother is the best player in my family. But it can also be much more complex. It makes you think and look deeper for things that aren’t obvious.”

Lytle developed the game in a BYUÂ  entrepreneurship class that requires students to start a business and raise at least $1,500 in revenue in one semester. While most groups were implementing temporary business models—designing T-shirts or selling hot chocolate—Lytle’s group was designing cards and formulating a long-term marketing plan.

“They pioneered the process of how to file a provisional-patent application within the context of the class,” says entrepreneurship adjunct professor Kimberly Watt Scoville (BA ’93).

“It was a much bigger project than I ever anticipated,” says Lytle. “We had to print real products,â€‰.â€‰.â€‰.â€‰and I had to come up with that money myself.” Other students in the class were expected to dig up a few hundred dollars to get their businesses going. Lytle’s initial investment was a few thousand dollars.

A little more than a year later, Lytle has sold more than 500 copies of the game, and he shows it off whenever possible. He was also was recently contacted by Kanga Games, a company based in Taiwan that distributes games throughout Asia.

“For a lot of people, they’ll have a good idea and be passionate about it for a few weeks, but when it comes to doing the actual work or finding out that it’s not going to sell as easy as you thought, the passion wanes,” says Scoville. “Joseph hasn’t done that. He is maintaining his passion and determination, and that is the difference between being successful and failing.”

BYU computer scientists have developed a software that can transfer MRIs, ultrasounds, and more into 3-D images.