A Jig for Scotland

A student celebrates the culture of her homeland with her feet. 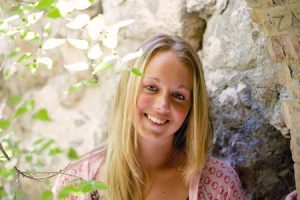 The melodic drone of a bagpipe fills the air, drawing the crowd of 80 to the center of the room where a young woman begins to dance.

Her small black Ghillie Brogues hop and skip nimbly on the ground as her MacLeod of Lewis tartan bounds and jigs in the air. One hand on her hip and the other raised above her head, Kimberlee Couper (’09) smiles at her admirers as they observe the brisk, graceful movements of her feet.

The group of Scots and Scotland aficionados have gathered at this ceilidh (Gaelic for party) in January to celebrate Robert Burns, the national poet of Scotland. Appropriately, a dish of haggis—sheep stomach filled with kidneys, liver, heart, and oatmeal—is served in honor of Burns’ poem “Address to a Haggis.”

Jane Young Loftus (MS ’99), holds small ceilidhs like these in Provo three times a year to keep her Scottish heritage alive. She often invites Couper—a distant cousin, but by measure of love, her own daughter—to dance the Highland fling, a dance historically performed before battles.

But tonight the fling is performed to remember, to remember the culture Loftus and Couper were raised with in Scotland.

“Kimberlee is the glue that cements us [Scots in Utah] together,” says Loftus, an adjunct faculty member in the BYU Math Department. “She is doing something very important with dance.”

Compared to the huge crowd at Cowal, the Provo ceilidh is a walk (or dance) in the park for Couper, but her purpose remains the same at every performance—to spread her Scottish heritage. When she left Scotland for BYU, Couper brought her kilt and ghillies in anticipation of sharing her talent.

The only young woman in her ward in Scotland, Couper was overwhelmed by the friendliness of her fellow students. She soon found that absorbing American culture became easier when she shared her own.

Besides dominating the ward’s talent show, Couper has performed for the BYU President’s Leadership Council, a group of Chinese dignitaries, and Christmas Around the Worldaudiences.

The psychology major returned to Scotland for the summer and will compete again at the Cowal Gathering in August. “It’s possible to win again,” Couper says, but she notes that the competition means more to her than another trophy.

All four dances in which Couper competes have historical significance. But perhaps it is her favorite dance, the Seann Triubhas, that best demonstrates her love of Scotland.

Pronounced “shawn trews” (Gaelic for old trousers), the dance celebrates the wearing of the kilt. To stifle Scottish nationalism and rebellion, the British monarchy prohibited kilts and bagpipes in the mid-1700s. On stage, Couper shakes her legs to symbolize the shedding of trousers after the proscription was repealed later that century. Final, faster steps represent the joy of returning to the wearing of kilts.

Couper’s dancing reflects not only her love of Scotland but also her desire to keep the culture alive.

“Kimberlee is doing something very important with dance,” Loftus says. “A lot of people have Scottish heritage, and she helps them take pride in that.”

BYU is contracted to develop new antibiotics, which are being tested on burn victims who are vulnerable to infection.