By Erick Carlson in the Spring 2000 Issue 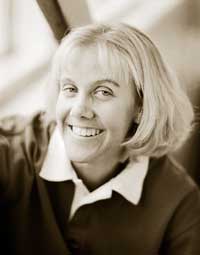 Maren Hendershot, 21, is a senior All-American forward and captain for the BYU women’s soccer team. From her pre-game warm up to her post-game congratulatory hugs, Henderhorse, as her teammates call her, is full of unbridled enthusiasm. Carolyn Billings, the team trainer, says simply, “Maren has a zest for life.”

The fans who watched her rev up the home-field crowd for the first-round game of the 1999 NCAA tournament–in which BYU shut out California–know something about that zest. Enthusiastic interaction with the crowd was a hallmark of Hendershot’s BYU career; in fact, the Cougar Club gave her its 1998 Crowd Pleaser of the Year Award.

And she brings excitement to the game not only on the field but off the field, too. In April 1999, though sick and unable to compete, Hendershot told her coaches she wanted to wish the rest of the team good luck before a trip. A year earlier, two would-be starters had decided late in the season that they would leave the team and serve missions, which caused recruitment stress for the coaching staff. They had reminded the rest of the team to give more notice in such cases. Well, at that April 1 meeting Hendershot stood up and announced that she had received her call to the Spain Las Palmas Mission.

“They freaked out. It was great,” she says. “My heart just dropped,” says Jennifer Rockwood, head women’s soccer coach, who was relieved to learn that it was only an April Fool’s joke.

The prospect of unexpectedly losing her team captain might well have worried Rockwood. “Maren has been one of the top forwards in the country the last two years,” she says. A two-time conference player of the year, Hendershot has started in every game but one during her four years at BYU, and she missed that one because of an injury. With her on the roster, the women’s soccer team, only five years young, has made three straightNCAA tournament appearances. And she was named an All-American after both her junior and senior seasons.

“It was a shock to me,” Hendershot says of her All-America status. “But I’d worked hard for so long. It was nice to finally be able to receive recognition for years of just working hard.”

Those years began at age 10, when a friend invited her to try out for a competitive soccer team. The friend quit playing after that year, but Hendershot stuck with it. From the time she was 13 until she came to BYU, she commuted an hour each way from her home in Colorado Springs, Colo., to play on a Denver club team.

Looking back, she attributes a lot of her success to hard work. “Sure I’ve been given some talent. But more than that my parents taught me how to work hard. I think that’s gotten me where I am.”

Hendershot’s three younger sisters have followed her onto the soccer field, and each season they compete to see who can score the most goals. The youngest, now 10, won two years ago, but Hendershot led in 1998, with 19 goals for the season. “She’s a little scoring monster, so I have to keep up with her,” she says. During her BYU career, Hendershot racked up 277 shots on goal, 36 assists, and 52 goals.

Of course, soccer isn’t the only thing she does. “Sometimes people think that soccer is my life. It’s a part of my life,” she says. “You can have a passion and a love for something without it absorbing your whole life and taking every minute of it.” Among other things, she enjoys hiking, snowboarding, rock climbing–anything to do with the outdoors–and all kinds of sports.

But her most important interest is people. “I love the crowd. I just love people,” she says. Though she is majoring in print journalism, she has earned a minor in coaching, and she plans to pursue a coaching career after she graduates in August. “I want to be involved in coaching because of that interaction with people,” she says.

Hendershot, who wears her CTR ring in each game, says she has especially enjoyed the chance to speak to youth at firesides, early morning seminary classes, and assemblies. “It’s so much fun to interact with kids. They’re all so excited,” she says. “It’s fun also to know that you’re living your life as a good role model.”

“Maren has touched the lives of teammates and the kids who have watched her play and heard her speak,” says Rockwood. “She exemplifies what it means to be a BYU student athlete. She is a true example of what a coach or parent would like to see, and everything the university wants its athletes to represent.”

These cougars have made big gains and have come out with more wins than ever.