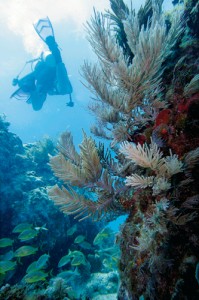 Exploring a Caribbean coral reef, a BYU geology student gains new perspective on the natural processes that create oil reservoirs from reef life and sand.  Photo by Mark A. Philbrick.

The bright Florida sun shines through a rich blue sky and warms a group of snorkelers preparing for a dive in the chilly, clear water of the Florida Keys. They slide into wet suits—those lucky enough to have them—and position masks and snorkels.“When you’re snorkeling, you’re by yourself,” Scott M. Ritter (BS ’81) tells the group. “You’re isolated with your thoughts. I want you to be thinking geology.” Geology? Of all the things to be thinking about on a beautiful day in paradise, Ritter urges the divers to focus on rocks. That’s because Ritter is a BYU geology professor and the group is composed of more than two dozen BYU geology students. And as relaxing and wonderful as this expedition into Caribbean waters sounds, it is no pleasure junket. The field trip is just one part of an exhausting and exhilarating exploration into the geological world of oil production. 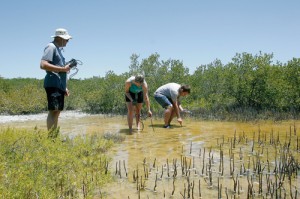 Measurements of current conditions inform the group’s discussions of the formation of oil reservoirs. Photo by Mark A. Philbrick.

Here and in the Bahamas, the students are immersing themselves in a real-life geology textbook, observing the formation of carbonate rock, or limestone, which serves as a prime storage medium for oil. In addition to intriguing students and professors, these highly permeable and porous rocks are of eminent interest to companies like Chevron and ExxonMobil. Between one-third and one-half of the world’s oil and gas reserves come from underground reservoirs in carbonate rocks. Also of interest to the oil and gas industry are BYU geology students, who, thanks to real-world experiences like this W. K. Hamblin Global Geology field trip, are attractive potential employees. Recognizing the importance of such experiences, Anadarko Petroleum Company, one of the world’s largest independent oil and gas exploration and production companies, helped subsidize this BYU mentored-learning excursion. With the continuing drain on the world’s oil resources combined with skyrocketing gas prices, finding new oil reservoirs is a high priority for the industry. 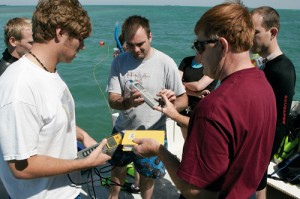 At various locations in the Florida Keys, students gather sediment samples as well as data about water properties. Photo by Mark A. Philbrick.

“Wages are so good in the oil and gas industry right now that most people in the program are landing there,” says senior A. Riley Brinkerhoff (BS ’05) from Vernal, Utah, adding that graduates of the program have earned as much as a $70,000 starting wage. “The money is tempting.” And so for one week, Brinkerhoff and his fellow students—14 undergraduates and 12 graduate students in all—get dirty, sweaty, sunburned, seasick, and extremely excited looking at countless samples of mud, sand, and rock, and not just for the promise of a petroleum payday. For budding geologists, this is fun.

From Reef Life to Black Oil 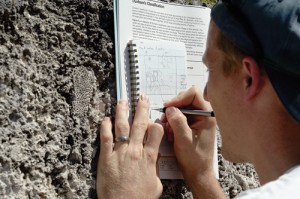 With oil companies eager to hire geologists who understand such concepts, the BYU students also study fossilized coral, visiting a Florida quarry where they observe the petrified remains of life that once teemed on an ocean reef. Buried by thousands of feet of sand, such organisms decompose over eons into black oil. Photo by Mark A. Philbrick.

The trip, funded in part by the BYU graduate studies office, began at Windley Key Fossil Reef Geological State Park in Florida, home to a limestone quarry that supplied massive blocks for the overseas Florida East Coast Railway in the early 1900s. The clean cuts of the quarry machinery exposed the fossilized remains of a 125,000-year-old coral reef. Nearly every inch of the quarry’s flat, sun-bleached panels contains recognizable plant and animal ocean life—mollusks, sea urchins, and corals of all shapes and sizes. In pairs, the students mapped meter-wide cross sections of the rock wall at the rear of the quarry. As part of the exercise, they explained to one another what they think happened geologically—why that portion of the wall looks the way it does. Peering at an undergraduate student’s mapping work, graduate student Carl E. Standley (BS ’04) encouraged the student to “take a mental snapshot” for the upcoming portion of the trip—a snorkeling excursion over living ocean reefs. “The ancient rocks here will help you understand the modern setting,” said Standley, from Salem, Ore. “Then, you’ll take that information and figure out what the petroleum is doing.” The next day, the students find themselves in boats on the ocean. Ritter, the lead faculty advisor on the trip, takes the group to multiple locations around the Florida Keys to observe the composition of sand and mud on the ocean’s floor. At each point, students take measurements of the water’s salinity, acidity, and temperature and gather sediment samples for later classroom discussion. 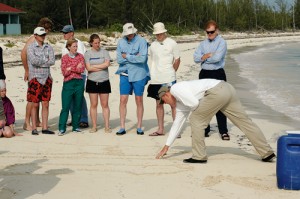 Throughout the trip, professors frequently stop on beaches, islands, or in the middle of the ocean to offer impromptu lectures about the geologic processes at work around them. 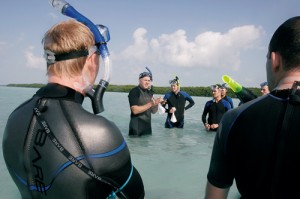 Photo by Mark A. Philbrick.

Hours later, the group swims across a reef, comparing what they saw in the quarry to a living reef. These observations give students knowledge of the sedimentology of present-day reefs as well as a glimpse of the plant and animal life inhabiting them. Over millions of years, the ancient ancestors of these plants and animals have decomposed, have been buried by thousands of feet of sand and rock, and have been cooked by the earth’s heat into the black fluid now pumped out of the Gulf of Mexico by oil rigs.

From White Sand to Carbonate Rock

To fill in the last puzzle piece in their understanding of how carbonate-rock oil reservoirs form, the students next travel to Andros Island in the Bahamas. The island’s shoal, a submerged sandbank roughly 15 miles by 10 miles across, is comprised of ooid sand—not the granite-based sand familiar to most North Americans. Each spherical grain of ooid sand—no larger than 2 millimeters—forms around a nucleus of fecal matter or shell debris in a process similar to that of a pearl’s formation. Over time, these oolitic sands accumulate in thick layers that cover hundreds of square kilometers. Upon burial, these layers eventually form a porous carbonate rock that can store large quantities of oil and gas. 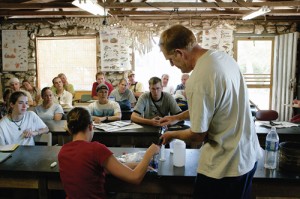 At the end of the excursion, the group retreats to a research station in the Bahamas to discuss and analyze their observations. Photo by Mark A. Philbrick.

To illustrate the concept, geology professor Thomas H. Morris (BS ’81), a faculty advisor for the trip, contrasts carbonate rock to lava rock. “Air bubbles in lava rock are nonporous and lack permeability. They are individually sealed chambers, unconnected to one another,” he explains. “That type of rock isn’t a good place to look for oil. Carbonate rock, on the other hand, allows liquid to pass through it very easily.” The site of the Andros Island shoal is how Miami appeared 130,000 years ago. For that matter, it’s also what parts of Utah looked like anciently—sand as far as the eye can see. Geologists call the Andros Island shoal a carbonate factory; it is one of three places where ooids are known to form, and Ritter guesses it’s the most pristine of the three. 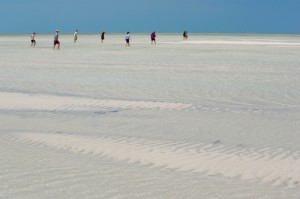 On the western edge of the Bahamas, students wade, ankle-deep, through the rising tide that begins to over the Andros Island shoal, one of three places in the world where ooid sand is known to form. Photo by Mark A. Philbrick. 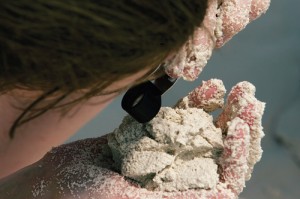 Over time, the spherical grains of ooid sand settle and harden, eventually forming a porous carbonate rock that is an ideal medium for oil reservoirs. Photo by Mark A. Philbrick.

The crystal blue water, ankle-deep when the group first arrives, barely covers the smooth, white granules beneath. As the tide rolls in, students are soon up to their knees. They repeatedly scoop the flowing sand into their hands, looking at it through magnifying lenses to better appreciate its properties. “I think these trips are priceless,” says Rachel M. Henderson (BS ’04), a first-year graduate student from Grosse Pointe Park, Mich. “Until I saw the carbonate factory in real life, I didn’t really understand the expanse of it all.” 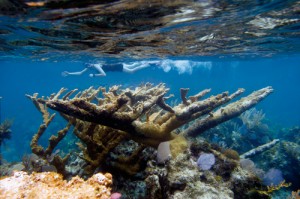 Photo by Mark A. Philbrick

Near the end of the trip, Morris tells students, “It’s really incredible what we’ve seen in the last few days. If you internalize it, you will have a great feel for carbonate sedimentation. You can talk the talk and walk the walk.” Eager to do just that, Anne Dangerfield (’06), a senior from Green Bay, Wis., hopes a future employer finds the experience as invaluable as she did. “I kept saying to myself, ‘So this is what that looked like when it was alive.’ The trip has really given me a better understanding of size and scope, and I think the experience will help me land a job after graduation.”

Grant Madsen is a media-relations manager for BYU‘s University Communications. FEEDBACK: Send comments on this article to magazine@ byu.edu.