When she was in third grade, Tiffany (name changed) and her family moved, and Tiffany found her attempts to make friends at her new school rebuffed. The rejection stung, and when fourth grade came around, Tiffany retaliated. “I remember getting some girls together to make fun of one of the girls who was mean to me, and we made her cry.”Three BYU professors are experts in how children like Tiffany use verbally and emotionally manipulative tactics—called “relational aggression”—to control and hurt other children. Assistant professor David A. Nelson (BS ’95) and professors Clyde C. Robinson (BS ’72) and Craig H. Hart (BS ’80), all in the School of Family Life, say that relational aggressors, who are often girls, gain popularity by using such strategies as excluding victims, spreading rumors or gossip, and alternately offering and withdrawing friendship.

This relational and emotional bullying can be harder to spot and deal with than the physical bullying more typical of boys, say the researchers. Parents and teachers are less likely to hear Carol spread a nasty rumor about Jennifer than they are to see Brian land a schoolyard blow on Jack. It isn’t completely invisible, though, and the BYU team says parents can take action to keep their children out of relationally aggressive situations—as the victims or the perpetrators.

Who Are the Mean Girls

Though we often think of mean girls as teenagers, the researchers found that relational aggression starts in preschool. In a 2005 article in the journal Early Education and Development, they reported that preschool children, especially girls, can be adept at excluding certain children, whispering secrets, and plugging their ears if a child they are mad at tries to talk to them. In their research, the team observed children saying things like, “You can’t be my friend unless you do what I say.” 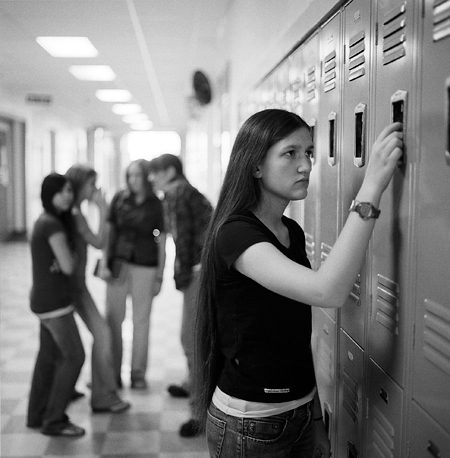 Mean girl behavior reaches the height of its destructive force during the teenage years, when girls are most concerned about their image and popularity. The “I won’t play with you” threats evolve into more orchestrated spreading of lies, gossiping, and ostracizing. Increasingly, the meanness is carried out using Web sites, instant messaging, e-mail, and text messaging.

“For girls who are victims of this, it’s just devastating emotionally,” says Hart.

Nelson and his colleagues also asked the preschoolers to nominate those in their classroom who engaged in aggressive or sociable behavior. As one might expect, the rejected children were high on aggression and low on sociability. Popular preschoolers exhibited the opposite pattern. In contrast, the controversial children “were both highly aggressive and highly sociable,” says Nelson, “meaning that, despite their aggressive nature, they can make friends easily, they’re outgoing, and they’re very socially central.”

Check Your Own Behavior

Parents can unwittingly model relational aggression for their children, say the researchers. Things like criticizing, gossiping, and shunning a neighbor teach children that relational aggression is ok. “When I told one parent that gossiping is a form of relationship aggression,” says Robinson, “she realized that she does a lot of gossiping with her friends when their kids are in the van. If children are hearing their mother and her friends saying gossipy and critical things, even if their tone of voice isn’t mean, the children learn that behavior.”

Girls are especially vulnerable to poor parental examples in this area because relationships are generally more important to them. So if girls are sitting in the back seat of a car, they’re more likely than boys to tune in to the conversation and follow the example, says Robinson.

The researchers also found, in a study published in Child Development, that hostile or psychologically controlling parenting can contribute to relational aggression in children. Hostile parenting includes yelling and threats of physical punishment. Psychologically controlling parents use guilt and withdrawal of love. “These parents give their children the cold shoulder when they don’t conform,” says Hart. “They won’t look at them or won’t talk to them for a period of time until they come back into conformance with their expectations.” A child exposed to these strategies will often use them at school.

As with all problems, prevention is far more effective than trying to intervene later. A few things appear to work well, say the researchers. First, parents should monitor the conflicts that arise in their home and watch out for relationally aggressive behavior. “Sometimes children pick it up from older siblings. If you hear older siblings talking meanly, talk to them. Explain that that’s not the way to solve things,” says Robinson. You should also listen for relationally aggressive tactics when your small children are playing with others. If you hear things like “You can’t play with me unless you do what I say,” intervene and teach your child how that makes others feel.

The researchers emphasize that intervention should occur as soon as possible. “If you don’t do anything until they’re adolescents and they’re maintaining their status at the top of the peer hierarchy using relationally aggressive strategies, it’s going to be hard to change,” says Nelson.

If you suspect your child is the victim of relational aggression, it is important to talk openly with her about what’s happening in school socially. If there is a problem, help her come up with strategies, such as standing up assertively to someone who treats her poorly. Saying things in a confident voice like, “I really don’t think you realize how ridiculous that sounds” and walking off can often dissuade a relational bully from inflicting future harm. You might also need to help her to detach entirely from the offending girl. This can be difficult, especially if the girl is inclusive and friendly some of the time. In extreme cases, parents may need to move their child to a different school.

Many schools are recognizing how serious relational aggression is and are trying to do something about it, such as educating faculty on the problem and teaching students prosocial skills. As a parent, you can encourage your child’s school to take proactive steps to reduce the problem.

Even though it is a painful experience, working through relational aggression can teach children important lessons about values and empathy. Both of Robinson’s daughters have been victims, and in the process of overcoming this adversity, he says, they’ve grown. “My daughters are more mature socially than many of their peers.”

There is also hope for perpetrators. Tiffany, the girl who used relational aggression to get back at peers in the fourth grade, says her parents taught and modeled empathy, and she realized how hurtful her behavior was. It came to a head one day in sixth grade when she was sitting with friends at lunch. Some of the more popular girls announced that they were going to find somewhere else to sit because they didn’t like two of the girls at the table. “I had to choose,” Tiffany says. “I decided then and there I didn’t want to be one of those girls.”

How to HelpPreventing Relational Aggression• Model kindness and inclusiveness for your children. Don’t criticize or gossip, and don’t ostracize or shun others.

• Teach your children that popularity should never justify mean behavior.

• Teach empathy by helping children understand their emotions and how others might feel under similar circumstances.

• Reason with a child who is using relational aggression. Help her understand the negative consequences of this behavior.Helping Victims of Relational Aggression
• Steer them toward friends who are not relationally aggressive.

• Help them develop strategies for handling specific situations, such as walking away when someone treats them badly.

• Encourage them to befriend other victims of relational aggression and help them heal from their wounds.

Responding to a Suicidal Youth

How can you tell if your child is suicidal? Here are signs to watch for.