In Fiddler on the Roof, Tevye and the other villagers of Anatevka sing about traditions at a place and time when every person’s role in life was dictated by tradition.1 In Tevye’s world, traditions served families as a source of strength; they gave families a sense of identity and faith. Nowadays, when so much is changing, traditions still give family members strength and stability as well as a sense of certainty when life may seem uncertain. As one mother said, “Traditions give you a sense of family, and they give you a sense of belonging to a group of people, not being alone in the world.” 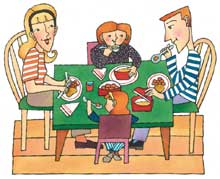 During 1998 and 1999, I conducted interviews with 28 one-, two-, and three-generation families about their experiences with tradition in family life. The families were interviewed at their homes in Chicago, Salt Lake City, and Baton Rouge, La. Family members were African American, white, Hispanic, Cajun, Israeli, and Pakistani. They were Roman Catholics, Muslims, Latter-day Saints, Jews, Baptists, Methodists, and Presbyterians. The real-life experiences of these families confirm in a qualitative way what scientists have documented in more quantitative studies and shed new light on the interplay of faith and tradition.

A Source of Strength

In their comments, families participating in this study showed that they have independently discovered what scholars have learned—family closeness, unity, and strength are fostered by traditions. For example, in a related study, researchers found that the highest level of family cohesion, or sense of togetherness, was related to nothing more complicated than family dinnertime—sitting down to a meal together.2

Even—and sometimes especially—under difficult circumstances, traditions have a positive effect. Family members in this study spoke of their traditions as an anchor in hard times, as one mother explained: “At the time of a huge event, like a death, or a birth, tradition can carry you through. When your body goes on autopilot, as it does when there’s a death or any other tragedy, the traditions that you have are just like a wonderful cocoon that you feel wrapped up in and comforted by. . . . Traditions help you know that life goes on.” Traditions also help mitigate family challenges in more direct ways. One study found that families of alcoholics are less likely to transmit alcoholism to the next generation if they maintain the family dinnertime ritual and do not allow a parent’s alcoholism to disrupt this time together.3 In the same way, diabetic children whose families maintain regular routines and traditions in which they participate have fewer behavioral problems than diabetic children who lack those benefits.4

A Source of Identity

Traditions allow for the sharing of values and help to establish a sense of belonging, thus building identity for families. A mother reported: “Without these rituals, we would not be Jewish. . . . They connect me essentially; they connect me to people around me, my family, my community, my beliefs. . . . Our rituals give us an identity. They give us a sense of who we are and how we’re different from other people.”

Traditions also help to preserve the family’s “story.” Families are brought together through the process of sharing memories and experiences. Talking about a child’s birth, an eventful vacation, or even a trip to the emergency room reinforces the sense of family.

One woman’s happiest childhood memory was her annual trip with her father to the New Orleans Jazz Festival. “For years we sat through the rain and the cold and the heat and the everything,” she said. “Oh, but it was fun. It was really fun.” She and her husband, their children, and her widowed mother recently went back for the first time since her father’s death. The return to a beloved tradition makes a memory for a new generation and solidifies the family’s identity.

Families mentioned other identity-forming traditions such as Sunday evening ice cream, homemade Easter egg dyes, and a mother’s nightly rounds to check on and cover her sleeping children. These small traditions are remembered with love and repeated—”This is what our family does; this is who we are.”

A Source of Connections

Like treasured heirlooms, family traditions can be passed down, helping beliefs and practices to span generations, as one father relates: “Traditions are a perpetuation of what we believe to be good and wholesome and worthwhile and necessary. It’s keeping a good thing going.”

A good thing that seems insignificant can become an intergenerational tradition. A mother said, “We sing a bedtime song every night that my dad sang to me and his parents sang to him. . . . It was one of the first songs my kids learned how to sing.” These traditions increase the feeling of belonging and connect people across generations and time.

Continued traditions also give satisfaction to parents. A father of four explained, “Some of the greatest testimony we can have of the job we did would be daughters or sons . . . doing something because, ‘Hey, my mom [did it].'”

A Facilitator of Self-Examination

Traditions allow families to make adjustments by providing a mirror in which they see themselves. Research has demonstrated that rituals allow family therapists and family members to review priorities and consider changes that the family may need to make.5 As one Chicago mother said, “Traditions display what’s in your heart, where do you put your time and your energy. They show us where our heart is.”

One father emphasized this function of traditions: “Traditions are times when we can learn more about life—what I can improve on. . . . My behavior is seen in my children’s behavior; all of a sudden I can see it because of our traditions and interactions.” Perhaps the repetitive nature of some traditions allows family members to chart and evaluate their behavior over time.

Many parents are forced to adjust their thinking when a child refuses to participate in a family tradition, such as competing in a particular sport or playing a certain instrument. These occasions may provide families a chance to examine themselves and evaluate a possible need for change.

Sometimes a tradition needs to remain the same, despite a lack of involvement. For example, one Jewish mother’s 12-year-old son recently decided he’s an atheist. She hopes that as her son “goes through the various stages of life, even though he doesn’t believe right now, . . . if he decides he does believe, he’ll have rituals to come back to. But if we never expose him to these rituals now, whether he believes or not, he won’t feel a sense of connection to them as he grows older.” There are times when family traditions must continue for the sake of the family, even—or especially—for the sake of family members who refuse to participate.

A Source of Faith and Meaning

In nearly every interview, a connection between faith and traditions was apparent. Families saw their faith as an important element in why they had traditions, how they structured them, or what they expected to derive from keeping traditions. Traditions may be a reflection of the family’s faith or an integral part of religious holidays or practices, such as Christmas or Passover or the pilgrimage to Mecca. However, some family traditions that carry significant meaning are not connected to religious observances. One family regularly helps at a soup kitchen, with any of the children’s friends who are willing to join them. The tradition conveys the family’s belief that its members have an obligation to help those less fortunate and that friends are welcome to participate.

Healthy traditions create a winning situation for families. They bring love, meaning, and closeness to family members across the generations. One family has a 20-year tradition of gathering every spring to list each person’s favorite things—book, song, food, etc. The lists are preserved, and the now-college-age children look forward to each year’s creation of new lists and the sometimes-hilarious review of previous lists. Their mother said, “This simple activity has a lot of meaning for our family. . . . It gives us an insight into each other, a way to get to know each family member better, as well as ourselves. . . . This has done more than anything else to build unity and family ties.”

Lloyd D. Newell is an associated faculty member in BYU’s School of Family Life and a member of the Religious Education faculty. This article is adapted from an article in the December 1999 issue of Marriage & Families, a magazine published by the School of Family Life. Information about Marriage & Families is available by e-mail (marriage-families@byu.edu) or by phone ([801] 378-9093).

Family vacations that go awry—which is all of them—are the best kind.

Computer scientist and mother of four Meher Shaikh sees no sacrifice as too high a cost for education.