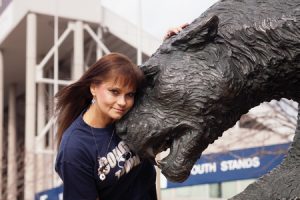 An enthusiast for all things BYU, alumna and ultimate fan D. J. Johnson takes every opportunity to show she bleeds blue.

When D. J. (Debbie) Hix Johnson (BS ’83) learned she needed a dental crown, she was surprised to discover that her dentist could embed an image in it. He asked her if she wanted a ladybug.

“I had never heard of anything like this, but I told him if I had anything, it probably would be a blue B to represent my love of BYU,” she says. “He looked at me for moment and said, ‘I can do that.’”

She added a blue Y when a second tooth next to it failed, and the Orem, Utah, resident says she will likely add a U if she ever needs another crown. Located at the lower left side of her mouth, the letters’ presence is apparent only to Johnson, but they are yet one more sign of her devotion to her alma mater.

The BYU enthusiast considers herself a fanatic when it comes to the Y, and with more than 320 pieces of BYU memorabilia—not counting duplicates—she won’t get an argument from many people.

In her interview for this story, Johnson wore a BYU denim jacket, a BYU T-shirt, and a BYU necklace, along with a Cougar baseball cap. She arrived in a car sporting a novelty license plate that reads, “#1 Cougar Fan,” and she answered her cell phone whenever it trilled the school’s familiar fight song.

“I wear a BYU T-shirt every day of the week,” she says. “I don’t wear one to church, but as soon as I get home, I pull one on. I have to, since I consider myself the number one fan.”

Johnson’s passion for all things BYU is undeniable, and she says she had a passion for the school while growing up in southeastern Idaho. “I was one of only a few family members active in The Church of Jesus Christ of Latter-day Saints, and when it came to choosing a college, I wanted to attend a Church school,” she explains. She applied to only one school—BYU, of course.

“Those years at BYU were the best four years of my life,” she says. “The social life, spirituality, and academic learning were amazing. I thrived at the Y, and my love of the gospel deepened.”

But Johnson’s favorite part of BYU would have to be football. “Football is my favorite sport in the world, and the BYU stadium is the best place in the world to me,” she says. “And LaVell Edwards is the best coach in the world. I must say, though, that as I learn more about Bronco Mendenhall, I am in awe of him.” She continues to earn a deeper respect for him each fall as she attends the BYU Women’s Football Clinic, where she learns plays, meets players, gets another T-shirt, and actually plays on the field. “These clinics energize me. You’re probably not surprised,” she adds, “that I’m definitely the loudest one.”

Until poor health derailed her career as a computer analyst for Provo City three years ago, Johnson boasted an office bedecked with blue and white. It was filled with Y-shaped holiday lights she plugged in for every BYU football game, a BYU cheerleader Barbie, posters, flags, signatures of former quarterbacks, and more. Outside her door she posted a sign that read, “D. J. is the ultimate BYU Cougar,” along with a Cougar parking sign. Not surprisingly, her computer screen saver displayed various BYU images.

Her devotion to BYU shows no signs of decline. Though she is barely 50, Johnson has already arranged to be buried in the Provo Cemetery under a granite slab that reads, “#1 Cougar Fan,” with the stone facing toward LaVell Edwards Stadium.

BYU student Hunter Sebresos took the chance and came out ahead.

Making a Difference, One Baby at a Time

Inspired by a parable, an alumna has rescued more than 100 Chinese orphans.

A BYU alum and doctor shares his experiences as part of volunteer team that helped Haitian hurricane survivors.