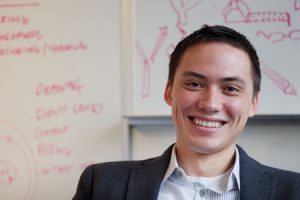 Had Hunter A. Sebresos (BA ’06) picked up his copy of Advertising Age any later, he would have missed his chance. The prestigious national advertising magazine had made a call for videos predicting the future of media in 2011, and the deadline was the next day.

Fortunately, Sebresos had already been focusing on this very idea. He recorded and submitted his video prediction that evening and won. Later that year he spoke at Advertising Age’s 2010 Media Evolved Conference in New York. In his presentation, Sebresos predicted that we will start to see a lot more media and computing that interacts with and is part of the physical world.

Sebresos earned his bachelor’s degree in advertising from BYU, later pursuing an MFA in art and design at the Art Center College of Design in California. With the momentum from his MFA and his success with Advertising Age,Sebresos is bridging the worlds of art and advertising to start a new kind of consulting company that focuses on moving ahead. The company is called Dyvergent.

“It’s a dream come true,” Sebresos says. “The y in Dyvergent symbolizes diverging from the norm and is also a tribute to my alma mater.”

BYU has its very own Bill Nye in the science classroom.

We Are the Champions, My Friends