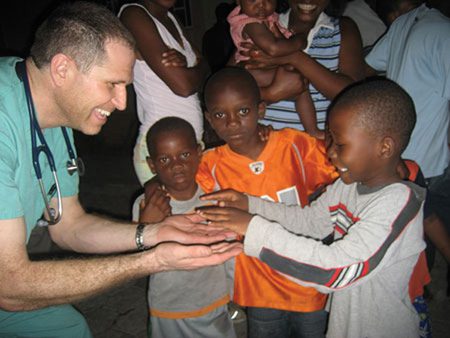 Doctor Brandon Hall plays with some Haitian boys, a few of the 2,000 people camped out at a Latter-day Saint chapel in Haiti. Hall was a part of a Church medical team that offered assistance after a devastating earthquake struck near Port-au-Prince in January.

As Brandon Hall (BS ’97) listened to news reports describing the overwhelming damage caused by the Jan. 12, 2010, earthquake in Haiti, he knew he had to help.

“I speak French and could get the time off,” says the family-practice physician. “But my wife, Mary, was nine months pregnant.” Only when she persuaded him she was fine and that he should volunteer did he contact his friend, a public-health doctor for The Church of Jesus Christ of Latter-day Saints. Hall’s name was added to a database, and within a few days, he was part of a Haiti-bound medical team that included 12 doctors.

“The Church spent a lot of time assembling bags of medications and supplies,” he says. “We were equipped with military meals, tents, and survival packs; every personal item had to fit in a carry-on. I got every antibiotic I could from Utah Valley Regional Medical Center and filled my bag.”

He expected devastation but describes what he saw in the sweltering heat as apocalyptic. “Thousands and thousands of concrete buildings were down,” he explains. And thousands of Haitians were in need of assistance.

“Aside from the trauma, infections, and psychological damage, people were still having babies, suffering from urinary tract infections, and having other normal problems—and their entire medical system had been decimated,” he says.

One of Hall’s first patients was a man who approached him on the side of the road as he and another doctor were stitching a boy’s head. “He said he couldn’t move his shoulder. It was dislocated, so I grabbed him around the chest while another doctor did a manual relocation,” Hall says. “I give people 10 milligrams of morphine for this procedure, and they still holler. He only gave a soft little grunt, said, ‘Yeah, thank you,’ and walked away.”

Hall treated hundreds of victims suffering from third-degree chemical burns. Dust from the crushed concrete would get into wounds, and when mixed with sweat and other body fluids, it would eat through the injured person’s skin.

“We treated a lot of crush injuries and saw many people with dead muscles in their arms and legs,” Hall says. One woman, who initially resisted having her arm amputated, first screamed and then began to sing praises to Jesus for the doctors who were there to save her life. “I needed to peel off bandages that were deeply embedded in her skin,” Hall explains. “She was in absolute torture but showed immense gratitude.”

Not all operating rooms were so stable. Registered nurse David A. Sindel (BS ’73) was assisting Dr. Carl Ogden in an operation for a 13-year-old boy with a broken tibia on the third floor of a five-story structure when it began to vibrate. Glass broke, items fell from the walls, and people ran from the room. Ogden muttered something and kept operating.

Most sobering to Sindel was a visit to a destroyed central hospital where 146 nurses had been killed. “To know that they were nurses was hard,” he says.

Sleeping outside in Haiti is dangerous, so finding shelter was a major concern for the team. They were welcomed into a compound on the property of the engineer who had built the Latter-day Saint churches. Two of the engineer’s nieces were medical students whose education was halted by the quake when their school was destroyed. Hall plans to bring them and a young member of the Church to Utah to do rounds with physicians.

“I am in awe of the Church members in Haiti,” says Hall, who did make it home in time for the birth of his son. “Through them I learned about true charity and humility. They were busy nonstop, helping us filter water, distribute food, provide transportation, and translate. They found patients and brought them in. They had nothing but did everything. I was amazed at their selflessness. Through all this, they were also grieving. Nearly everyone lost someone special in the quake. These wonderful people have changed the way I look at life.”