New Clues to an Ancient Puzzle 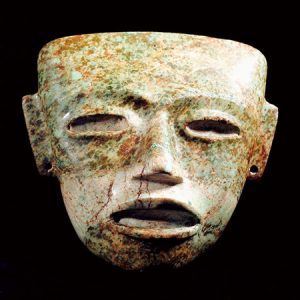 Symbols on the back of this pre-Maya mask demonstrate scholars’ inability to decipher the Isthmain writing system. Photo courtesy of Michael Coe.

A recently discovered ancient mask from southern Mexico contains an inscription that shows that the pre-Maya language used there remains undecipherable, according to a new study by BYU archaeologist Stephen D. Houston and Yale University professor emeritus Michael Coe.

Translating the Isthmian script, the written form of one of the languages used in Mesoamerica from about 500 b.c. to a.d. 500, would be a tantalizing key to unlocking the mysteries of ancient American societies before the Maya. In 1993, two other scholars reported that they had deciphered the writing system, an assertion disputed in the new study, published in the journal Mexicon.

The researchers who claimed to decipher the Isthmian script call it “epi-Olmec,” based on their belief that it is an ancestor to the family of languages spoken from Maya times to the present.

“This study subjects a claimed decipherment of an ancient New World script to rigid standards of proof and shows that this script remains undeciphered,” says Coe. “The inscriptions found on the mask amount to a ‘test case’ for the validity of the claimed decipherment,” allowing researchers to apply purported meanings of symbols to a new inscription and see if the results make sense.

“It comes up with a nonsensical pattern,” Houston says.

The newly analyzed mask adds another 25 signs to the Isthmian “alphabet,” showing that there is still much scholars don’t understand about the script.

In the last three years, BYU has filed patents for eight compliant mechanisms invented by Larry Howell and two students.

CES experts give parents advice on how to help your teen get accepted into their school of choice.

Head of the (Virtual) Class

Lauren Ard has combined science and pop culture to captivate more than 10,000 students in her beloved online classes.