By Carri P. Jenkins and Cecelia Harris Fielding in the Fall 1999 Issue 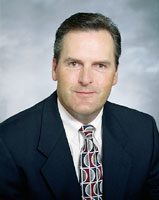 The university underwent several key administrative changes during the summer. Men’s Athletic Director Rondo Fehlberg stepped down and was replaced by Val Hale, who had been serving as the associate athletic director for external affairs. Sandra Rogers, former dean of the College of Nursing, was named the associate academic vice president for international, distance, and continuing education. And John C. Lewis, an associate advancement vice president, was given responsibility for the newly consolidated alumni and external relations functions within the Office of Advancement.

After serving four years as director of men’s athletics, Fehlberg announced his resignation in June. “It has been my privilege to be associated with truly wonderful faculty, administrators, and student athletes who share my devotion to this great university,” he says. “I am confident that Val Hale will continue BYU’s strong tradition of excellence in intercollegiate athletics.”

Fehlberg came to BYU in 1995 after spending 16 years as an attorney and executive in the oil business. During his tenure BYU participated in the 1996 Cotton Bowl, the school’s first-ever New Year’s Day bowl game. Earlier that season BYU hosted the Pigskin Classic, defeating Texas A&M in a nationally televised game. Fehlberg also helped the university complete its initial 10-year NCAAcertification review and transition to the new Mountain West Conference.

“We are grateful for the contributions Rondo Fehlberg has made,” says BYU President Merrill Bateman. “His enthusiastic support of BYU sports is legendary. We wish him continued success in his new ventures.”
Hale is a 17-year veteran of the BYU athletic department. In 1989 he was appointed assistant athletic director for media and public relations, and last year he was promoted to associate athletic director for external affairs and was given administrative responsibility for baseball, golf, tennis, and swimming. 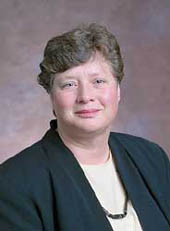 “I will sorely miss working with Rondo Fehlberg, whom I consider to be a man of highest integrity and ability, and who is a great friend,” Hale says. “At the same time, I am humbled, yet excited, by the challenge of leading such a talented group of coaches, administrators, and student athletes.”

After serving six years as dean of BYU’s College of Nursing, Rogers assumed her duties as associate academic vice president for international, distance, and continuing education in July. She replaced Cheryl Brown, who recently married and has left the university.

“We appreciate Dr. Brown’s many years of service to the university, both in her capacity as an associate academic vice president and her work as a professor of linguistics, and we wish her well in her new life,” says President Bateman. “We’re confident that Dr. Rogers’ international and administrative experience will bring a fresh perspective to our distancelearning programs.”

An alumna of the College of Nursing, Rogers received an MS degree in medical/ surgical/psychological nursing at the University of Arizona and a DNS in international and cross-cultural nursing from the University of California, San Francisco. She served a welfare services mission for the LDS Church in the Philippines and has worked with the Church’s Humanitarian Services Committee in Africa and Eastern Europe as well as with other international nursing projects.

“I am awed by President Bateman’s vision of what BYU can be and will do my best to work to achieve those goals,” Rogers says. 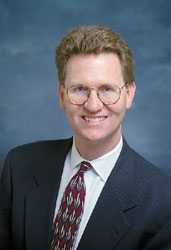 Lewis, who has been serving as associate advancement vice president of marketing since July 1998, now heads the university’s alumni and external relations efforts.

“BYU is attracting the attention of worldwide audiences in ever-increasing numbers,” says K. Fred Skousen, advancement vice president. “There are a host of benefits to aligning our core external relations efforts within one organization.”

“We have appreciated the dedicated service of George Bowie over a long career with the university,” Skousen says. “We are grateful to have the talents of John Lewis available to us as we enact this significant reorganization.”

“My commitment to BYU and its mission runs very deep,” Lewis says. “I look forward to the opportunity to contribute through this expanded assignment.”

Hundreds of service hours earned Karen Call a BYU first and helped her recover from depression.

The Utah Valley Food Bank is richer thanks to the efforts of U of U and BYU.

How Tara Westover went from a rural Idaho town to BYU, Cambridge, and back again.