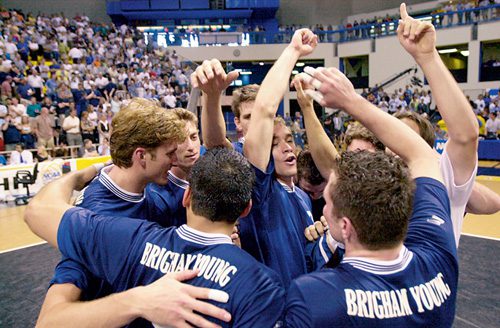 BYU is the only team that has beaten us this year that we haven’t had a chance to beat. This time we’ll be ready and hopefully even the score.” That confident statement byUCLA‘s legendary coach Al Scates–copied to the white board in the Cougar locker room–accompanied the BYU men’s volleyball team as it prepared for its NCAAchampionship match on May 5. The quote was there to motivate and add perspective: the Cougars were about to face history’s most dominant volleyball power.But on the court at the Pyramid in Long Beach, Calif., the confidence of the top-seeded Bruins–winners of a record 18 national titles–evaporated as the Cougars furiously blocked, set, and spiked their way to a second national championship. UCLA (24-8) fell to the Cougars (23-4) in three close games, 30-26, 30-26, 32-30.After the victory outside hitter Michael Wall, ’02, said, “I wasn’t worried about all their championships. I’m sure that could be intimidating to some teams, but we didn’t let it get to us. We won our second national championship, and it doesn’t get any better than beating a team like UCLA in the championship match with all its history and tradition.” After contributing 16 kills, five digs, and four block assists, Wall was named the tournament’s most outstanding player.While BYU dominated college volleyball all season–posting the nation’s highest winning percentage, spending seven weeks at No. 1, and winning the Mountain Pacific Sports Federation (MPSF) regular-season title–a loss to Hawaii in the MPSF tournament on April 26 put BYU‘s post-season fate in the hands of an NCAA committee. Ultimately, the Cougars received the only at-large bid, entered the Final Four as the No. 2 seed, and beat Penn State before challenging UCLA for the championship.Before the season BYU head coach Carl M. McGown, ’63, thought this team could win a national championship. “It was great to win the championship in 1999 when we should have won it, but it’s an even better feeling to win it when the odds weren’t so much in our favor, and to win it against the best of the best–it’s such a great feeling.” 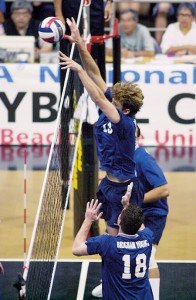 In the end UCLA coach Scates had high praise for the Cougar squad. “BYU is the best team in the nation,” he said. “Scott Bunker is the best blocker in the nation–better than anyone on the national team right now. Simply, with Bunker and guys like Joaquin Acosta, this is the best team BYU has ever had.”Further accolades for the Cougars came in the form of selections to this year’s American Volleyball Coaches Association (AVCA) All-America First and Second Teams. Wall and Matthew D. Olsen, ’01, received their first AVCA All-American honors, while Hector Lebron, ’01, and Scott R. Bunker, ’01, became two-time recipients.BYU will lose Bunker, Lebron, Olsen, as well as Mackay I. Wilson, ’01, but the team’s goal remains the same–to compete in the Final Four next year. With McGown’s proven ability to recruit and coach, and with the players’ potential, there is no reason to expect any less.

As the COVID-19 virus swept across the world, alumni sought ways to help. Here are stories from three of them.