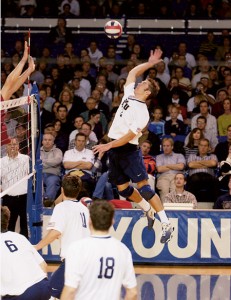 All-Americans Mike Wall (above, center) and Joaquin Acosta led the Cougars in kills- Wall with 517 and Acosta with 416.

THE Cougars finished the 2002 season ranked third nationally with a 23-7 record, achieving their third 20-win season in the past five years.At season’s end Michael Wall, ’02, and Joaquin Acosta, ’02, were named to the American Volleyball Coaches Association All-America first team. With these two All-America citations, the Cougars have had at least one All-American each year for 12 straight seasons.Consistent with his announcement last fall, Carl M. McGown, ’63, has stepped down after 13 years as head coach. McGown led the Cougars to national championships in 1999 and 2001.The BYU men’s volleyball team was not given the at-large bid to the 2002 championship tournament. Hawaii, the at-large selection, joined Pepperdine, Penn State, and Ball State as the four teams competing for the national championship. In the end Hawaii beat Pepperdine to become this year’s champion.According to Dick Falls, senior associate athletic director at Ball State University and chair of the three-member selection committee, a number of teams being considered were easily eliminated by weighing selection criteria. Hawaii and BYU, however, were so close that a difficult vote by the committee members was required to choose the at-large team.“There are efforts to expand the number of teams competing in the final tournament, but they are currently on hold due to a two-year block by the NCAA,” says Falls.

The Benefits of Mommy Blogging

Research shows increased marital satisfaction and less parenting stress are just some of the blessings of blogging.

Fire from Heaven: The First Vision and Its Aftermath

The “BYU Rule” Is Back

The NCAA did a double reverse and decided to once again make accommodations for schools with religiously-based policies.