The Benefits of Mommy Blogging

Rachel Turley Ligairi (BA ’04, MA ’06) is a reserved person who says she doesn’t make friends easily. So when she became pregnant with her first child in 2008, she was grateful she had started a blog because it helped her meet like-minded women and find broad support during the transition to parenthood and beyond. 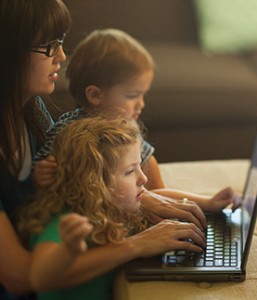 By blogging about her experiences as a new mom, Rachel Ligairi built a nurturing community where parents share the trials and joys of raising children.

“Through my blog, I met two women I’m now very close friends with,” she says. “All three of us were pregnant with our first babies around the same time and went through all that together. We supported each other through our births, nursing challenges, and different stages of our babies’ development. Blogging built a community for me.”

Ligairi’s experience is typical of many of the 157 “mommy bloggers” recently studied by former psychology student Brandon T. McDaniel (BS ’10) and his faculty collaborators Sarah Money Coyne and Erin Kramer Holmes (BS ’98), both assistant professors in the School of Family Life. They found that moms who blog feel more connected to their extended family and friends. “That seems to snowball out into other areas of their life—their feelings of broader social support and their general well-being. They feel less parenting stress, and that ultimately leads to less depression,” says McDaniel, lead author on a recent article in the Maternal and Child Health Journal.

McDaniel, now a doctoral student at The Pennsylvania State University, says they found that higher marital satisfaction and less marital conflict are often associated with blogging.

Today about 4 million moms blog. And while there’s no way to know how many blogs are written by Latter-day Saint moms, the number appears to be disproportionately large compared to the Church population.

Many think of mommy blogs as treacly prose and cheery photos and assume they don’t have much purpose beyond bragging about kids or sharing craft ideas and recipes. Actually, mommy blogs vary widely. Some serve as glossy digital scrapbooks while others offer frank narratives that explore thorny angles of mommy angst, from postpartum depression to the alarming colors of new-infant poop.

Juliana Hacken Montgomery (’01) says she was shocked by her new life as a mom and needed a safe place to express her frustrations. “Everyone around me acted like being a mother was just joy and peace all the time, but they didn’t talk about how much of a struggle it was. I wanted to affirm to myself and others that you’re still a good person, even if parenting is really hard for you,” she says. So she created the blog True Confessions of a Mormon Mother (blog.geekuniverse.org), where shewrites openly about her struggles with depression, anxiety, and raising an autistic son.

Like Ligairi, Montgomery has found her blog to be a lifeline—for herself and others. “Other women started following the blog and getting in touch with me to say, ‘Yay! I’m so glad I’m not the only one who feels that way.’”

The Transition to New Parenthood

McDaniel became interested in the transition to parenthood when some close friends became new parents. McDaniel, who didn’t have children yet, watched as his friends faced radical changes in their lives in a short period of time—readjusting their roles as spouses, learning how to care for a new infant, experiencing sleepdeprivation.

Based on his observations and on his coursework at BYU, McDaniel started his own parenting blog (parentsareimportant.com), where he saw parents share information and offer support to each other. And then in 2009 he and his wife, Jalisa, transitioned to parenthood themselves. She started a blog (patchesofpink.com), and he noticed how she and other women found comfort and reassurance as they reached out to each other online.

McDaniel’s observations resulted in a study of 157 Internet-savvy moms. Because of the small sample size of this exploratory study, McDaniel is careful not to promise that every mom who blogs will feel better. “Some individuals really do not enjoy writing or trying to interact on the Internet,” he notes. “But it can be helpful for mothers who think they would enjoy it.”

The study also looked into social networking sites like Facebook, but activity there did not correlate with feelings of social connectedness or well-being. McDaniel theorizes that for some mothers such sites are too public and don’t provide the more intimate, trusting environment of a blog.

Faculty collaborator Holmes says the study “landed in a really great journal and has gotten tons of buzz.” Because blogging and social networking are so new and have been studied so little, it provides an important start, she says.

The idea that average marital satisfaction decreases after the birth of children is backed by research, but Holmes says it’s a pet peeve for her that only the average gets publicized. “The research reports much more diversity in new parents’ marriages. Publicizing average declines sends the message that your marriage has to sink when children arrive. If you expect it to decrease, it might be more likely to happen.” A closer look at the research shows that some marriages stay the same and others report better marital satisfaction. One such group is mommy bloggers.

With a new mom’s increased feelings of connectedness and social support often comes better marital satisfaction and less marital conflict, say the researchers. Holmes believes that when a mom feels that many people care about her, her husband is relieved of being the sole emotional support. “People might think, ‘Oh she has her baby now; she has her outlet,’” says Holmes. “But a broader social network of people who can be a resource and who she knows support her might be one of the reasons that marital satisfaction is better.”

Ligairi’s husband, Joshua, is a highly involved husband and father, but Rachel says he didn’t have the exact type of experiences to share like the women she met blogging did. Often Ligairi initiates a topic online, and that spurs long discussions offline with her friends: “We’ll talk birth, mothering, and nursing for hours at a time. We talk about the same things with our husbands but not to the same extent.”

When Holmes first became a mother about a decade ago, she was a doctoral student specializing in the transition to parenthood and considered herself an expert on the topic. Even so, she wasn’t prepared.

“I was supposed to be an expert, but I just couldn’t anticipate the emotional experience it would be for me or the time I would need to recover and heal,” she says. “The intensity of my baby’s needs—and having such a strong desire to be a good mom . . .—was more emotionally demanding than I expected it to be. I just didn’t realize how I would feel like my baby needed so much from me and how I would feel like I was just too tired to give it.”

In a new study Holmes is finding that the men and women who didn’t expect a lot of changes with parenthood tend to have a harder time. “But, being prepared doesn’t mean someone telling you, ‘Wow, everything’s going to stink, and it’s going to be terrible.’ It just means having a more realistic view of the kinds of changes that tend to happen.”

In an upcoming article, Holmes and her coauthors argue that expectations should be broadly defined in areas of intimacy, finances, and a baby’s needs. “People seem to transition better when they’re willing to learn to reach out to others, to recognize that the transition is challenging, to not be too discouraged when challenges come up, and to know how to get information and then actually get it when they need it,” she says.

Blogging can potentially help with all those needs, especially for moms. Even if the benefits aren’t dramatic, McDaniel believes the life history that’s created is priceless. “I keep a private family blog,” says McDaniel, “and in my experience it’s nice to be able to look back and see how far you’ve come in your parenting. I think that can really help you feel more successful as a parent.”

BYU research shows that men benefit less from “network support” and more from support from their wives and other parents. Holmes offers these suggestions to help new dads transition to parenthood:

• Be aware that becoming a parent can place you at risk for decreased marital satisfaction and self-esteem.

• Gather information about your new infant’s needs, your wife’s needs, and common changes you can expect in your marriage. Being well prepared buffers against depression.

• Come to agreement with your wife about discipline strategies and how to divide household and child-rearing responsibilities. Finding ways to support each other in these efforts will help you feel more competent and involved.

• Know that couples don’t need a strictly “equal” division of labor to feel good about their marriage or their transition to parenthood. But research does suggest that expressing appreciation for each other’s efforts to achieve balance increases men’s involvement in childrearing.

• Be aware of common areas of marital conflict for new fathers: chores and division of household labor, financial pressures, relationship difficulties (such as communication, spending time together, and affection), balancing career and family, social isolation, and having less free time.