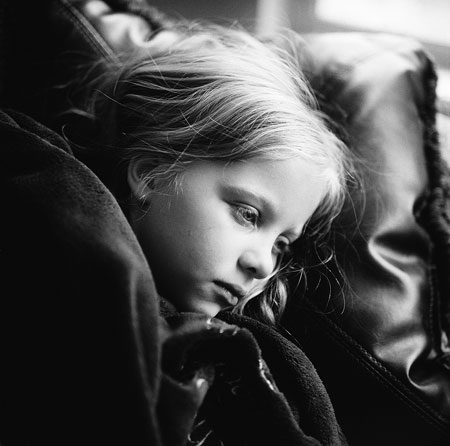 It’s been six months since 7-year-old Rachel’s father died of cancer, and on a recent spring morning, she was sick and curled up in bed with a super-soft blanket.

“It’s my Daddy blanket,” she said, drawing the fleecy fabric up to her chin.

Three days before he died in September 2008, Matthew N. Budge (BS ’96) gave all six of his children individual blankets, each a different color and each embroidered with their names and the message “I love you—Daddy.” The blankets are helping the Budge children grieve the loss of their father and keep their memories of him close to their minds and hearts.

Both adults and children can find solace from grief in gifts or possessions that their loved one left behind, but in many ways children grieve differently than adults. BYU professor Beth Vaughan Cole (PhD ’78), dean of the College of Nursing, has spent much of her professional life studying those differences. With a master’s degree in child psychiatric nursing and 10 years directing a center for grieving families, Cole has helped hundreds of children and adults work through their grief. (Here “children” refers to ages 3 to 12. Infants and teenagers handle grief differently.)

Young children absorb new information in a concrete, literal way. While adults can grasp the meaning behind vague, euphemistic, or figurative language, most children ages 3 to 7 cannot. Years ago, Cole worked with a family grieving the death of the father, who had been in a car accident and was on life support for a few days. The children were not allowed in the intensive care unit, so they learned secondhand about their father’s condition and eventual death. The day their dad died, Mom came home and told them she had “pulled the plug.”

Cole says it’s also important to remember that most young children cannot yet grasp permanence. Even after being told a parent or sibling has died and is in heaven, a child will likely ask, “When is he coming back?” or “Can I go be with her?”

For young children, the death of a parent—the most traumatic death for a child—is statistically most likely to be an accident, suicide, or homicide. The suddenness and violence often complicates grief. Adults have a hard enough time grasping these traumatic deaths, and most find it even more difficult to help children come to grips with them. Cole suggests gentle and very clear language. Explaining the suicide of a child’s father, for example, might go something like this:

“He had an illness that made him very sad. It made him so sad that he didn’t want to keep living. There’s medication for that and there’s help for that, but he just couldn’t ask for it. So you need to know that if you ever get that sad, there are people we can go to for help.”

Young children tend to think the world revolves around them, so they might think they are responsible for what happened—that they’re not good enough or didn’t do something they should have done to prevent the death. They need verbal clarity about what happened and why.

Many adults avoid conversations about death with other adults, let alone with children. In their own discomfort, they rationalize that children can’t understand death anyway, and they avoid the topic. Or they believe children should be protected by talking about it as little as possible. Some are grieving so intensely that they don’t think to talk with their children beyond a one-time conversation. Cole warns against these approaches. Ongoing, open conversation shows support and clarifies misperceptions. “Not talking about it creates all kinds of anxieties and questions that children can’t answer for themselves,” Cole says. “The topic becomes taboo—‘This is a terrible thing that’s happened, and nobody can talk about it.’ So they never get to put the death in the larger perspective of life and living.”

One of the worst consequences of not talking is that children may make up their own stories about what happened—stories often much worse thanreality. Or they might think that if they’re in similar circumstances, the same thing will happen to them. Cole says an 8-year-old boy she worked with was brought in for treatment because he kept jumping off high places and running out into the street. Cole learned that when the boy was 6, his 8-year-old brother died of leukemia, and he believed that in his family when boys turn 8 they die. “His family didn’t think a 6-year-old could really understand death, so they didn’t talk to him about it and he was left guessing. He was doing all these death-defying things, wondering how it was going to happen to him.”

While younger children need short and simple explanations, concrete language, and lots of repetition, children about ages 8 to 12 can handle longer, more in-depth discussions. They can more accurately verbalize their questions and worries, though they might be more reluctant to talk.

Crystal (BS ’96) and Matt Budge talked openly with their six children, now ages 2 to 12, from the day of Matt’s cancer diagnosis. “We included them all along in what was happening—and we were extremely matter-of-fact about it,” says Crystal. “This is what’s happening, this is what it means. We talked about it while Matt was still here.” As a result, the children are now matter-of-fact in talking about their father’s death, which has made their grief more manageable.

When a loved one dies, adults typically think of little else for weeks, months, or even years. Children, on the other hand, can grieve one moment and play happily the next. Crystal Budge sees this in her family every day. Grief comes for all of them in waves, but after the wave breaks, “they don’t seem to feel it so much anymore and they’re fine,” she says. “They can go play and be happy and do what they do and it’s not really present anymore. For me the wave will break and I will feel better, but it never goes away. It’s never out of mind.”

Cole explains children’s approach to grief with the phrase “taking it in chunks.” Often the chunks are expressed as questions, which are usually asked more than once. But what sounds like the same question each time probably isn’t. Children are grappling with the death and trying to understand it, and they want a little more information each time they ask. “If you’ve ever watched a child go up and down a slide, they usually don’t do it the same way twice. They’re trying out all different kinds of new adventures, new ways of learning something. So when they ask more than once, ‘How did Grandma die?’ they want to explore grief from a new angle.”

As children grow and shift into a new stage of development, they may revisit a death and rework it. They might not have talked about the loved one for a while and suddenly have new questions or a fresh take on what happened. Regrets and guilt that had not occurred to them before might surface. This is all normal and should be taken in stride.

Many families find that grief groups for children are healing. Cole suggests waiting about six weeks after a death before enrolling a child in a group. It takes about that amount of time to be able to listen to and absorb the valuable things others who are further down the grief road have to say. If support is needed within the first six weeks, Cole says individual counseling is usually preferable.

For children who join a group, one of the most valuable benefits is the normalization of a child’s experience with death. Crystal said learning otherchildren were also grieving was one of the things her children talked about most after their first visit to Canary Garden, a center for grieving children in Orem, Utah. “I think that helped them feel a bit more in control, a little less singled out. ‘There’s nothing wrong with us because this has happened to other people. And this has happened to so-and-so who’s my friend who I see every week.’”

Signs that a child needs outside support include slipping grades, refusing to attend school, regression that goes on for months (bedwetting, for example), problems sleeping, and eating less than usual or more than usual.

Do’s and Don’ts for a Child’s Grief

• Help children write down their memories of the loved one. As their memories fade, they will have their own personal recollections instead of only what others tell them.

• Include children in honoring your loved one around important dates such as birthdays, anniversaries, and holidays. Plant flowers, release balloons, or write letters to the late loved one and share them.

• Show a portion of your own grief. If you never cry in front of your children, they might think that they must hide their emotions.

• Use the death of pets or deaths experienced vicariously in movies or books to help process a loved one’s death.

• Use euphemisms like “gone to sleep” to describe a death. Children might think that if they go to sleep, they’ll die too.

• Make the person who has died the only topic of conversation. Help children keep up on other interests in their lives.

• Overly lean on your children in your own grief. A little leaning is healthy, but children should not become an adult’s primary source of grief support.

• Let your children take on too much responsibility. Remind them that you will take care of them and they can still be children.

More women are working outside the home—but they are still doing lion’s share of housework. Why?