Last summer, Marc S. Russell (BA ’07) and his wife, Yvonne, were becoming frustrated when their 2-year-old daughter developed a penchant for biting them. They had not experienced this behavior with their older child, and they were stumped. Marc thought about the cue his daughter was giving him—the desire to bite—and had an insight.

“I finally realized that she just had a need to sink her teeth into something. So I pulled out our teething rings and gave those to her to bite. She took really well to them. She stopped biting us and everyone else once we gave her the teething rings,” says Marc. 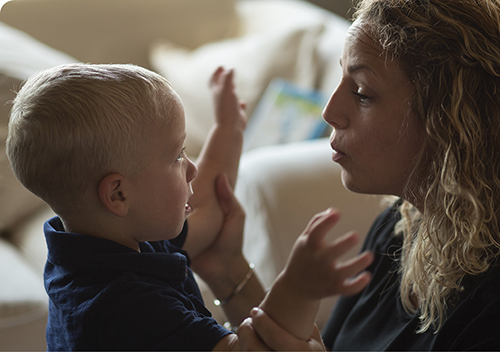 Focusing on children’s cues and reading to them earlier increase their cognitive development and better prepare them for school and other future challenges.

Cue-sensitive parenting, where moms and dads tune in to their child’s individual behaviors and adapt, is one of the keys to raising children who are “school ready” by the time they’re 5 or 6, say two BYU professors. In a recent study published inThe Journal of Pediatrics, sociologists Benjamin G. Gibbs (BS ’03, MS ’05) and Renata Tonks Forste (BS ’84) were able to disentangle this parenting behavior from breastfeeding, which researchers previously thought might be the most important factor in school readiness. It turns out that mothers who breastfeed for six months or longer are also more likely to engage in sensitive parenting behavior. While breastfeeding is the best choice whenever possible, say the professors, it’s not breast milk or breastfeeding that aid a child’s cognitive development. It’s the interactions with a tuned-in parent that really make the difference.

“This frees us up from thinking that all things in child development are linked to just breastfeeding,” says Gibbs. “There are things parents can do, including fathers, to enhance a child’s development—whether breastfeeding is part of the picture or not.”

Marching to the Beat of Your Child’s Drum

According to Gibbs and Forste, effective parents are sensitive to their child’s cues rather than expecting compliance to their preconceived ideas about how things should go. Gibbs and Forste drew their conclusions from the Early Childhood Longitudinal Study, conducted by the National Center for Education Statistics, which looked at 10,000 children over five years. The sample included 7,500 children who were each given a task that was outside their ability to do well. The researchers videotaped the mother’s reactions to her child’s efforts.

“The idea was to see what the mother does when her child is struggling. It turns out that the children of mothers who tuned in to their children and supported them in their struggle, rather than just powering through a task, show better early-reading and math skills,” says Forste.

Responding sensitively begins with noticing an infant’s cues, such as different kinds of crying, back arching, gazing at you, and turning away from you. In toddlers, cues begin to become more verbal. Behavioral cues include pointing at things (a bug, toy, window), dropping food on the floor during meals, and screaming. What these cues mean differs from child to child. Parents can learn their individual child’s cue language with patience and time—and likely lots of trial and error.

Both fathers and mothers can learn to tune in, and Yvonne Russell has found that her husband is better at picking up certain kinds of cues in their children than she is. “He learned more quickly than I did what our first baby’s different cries meant. That sense has gotten more refined over time. When our kids are acting out in ways not normal for them, he clues in earlier than I do that they’re sick and not just misbehaving.”

Many cues occur when parents are interacting one-on-one with a child. An infant might show frustration when Mom is reading a book to him by arching his back or crumpling a page. Rather than plowing ahead to get the book read—Mom’s agenda—sensitive parenting would mean slowing down to figure out why the child is frustrated. Maybe he wants to read a different book. Maybe he wants to look at the pictures longer. Maybe he just wants to go to sleep.

As parents better understand their child’s cues, one way to respond sensitively is to narrate aloud what they’re thinking and doing: “Oh—you want me to turn the pages faster. Okay, let’s go faster.” Cue-sensitive parenting with small children means maintaining warmth and encouragement no matter how much a child is struggling, say the professors.

“You’re finding out what is causing the frustration, helping him calm down, and meeting his needs rather than yours,” says Forste.

Parents’ understanding of one child’s cues isn’t necessarily transferable to another child. This may seem like an obvious principle, but it’s not so easy in practice. When Yvonne was toilet training her second child, she already knew that every child is different and it’s important to adapt, but she still found herself making assumptions about her younger child’s cues based on her experience with her first.

Not long ago, Gibbs had an eye-opening moment when he was up in the night with his infant daughter, who was “crying her brains out” for hours. An instructional video he and his wife had watched recommended “shushing” loudly in a crying child’s ear. “I shushed louder and louder, and then I lost it,” says Gibbs. “I grabbed the baby bottle and threw it across the room.” From that moment, he and his wife developed a better way to communicate when they needed help from each other.

Gibbs tells this story to his students because he wants them to recognize that when they’re in a stressful parenting situation, “all of these perfect parenting behaviors you want to exhibit, especially if you’re a new parent, can go out the window.” By understanding that intense stress is common in parenting young children, parents can prepare themselves to stay focused on sensitive parenting. When they’re losing it, they can step away from the situation. They can also forgive themselves for normal reactions to stress. (Of course, for more extreme reactions, parents should get professional help.)

Gibbs’s experience also reminds him that disadvantaged parents can be stressed much of the time. “I have the luxury of a stable job. My wife stays at home. If you have a whole lot of instability in your life, such as an insecure job or no job or you’re a single parent, it is harder to be sensitive to a child’s cues when you are just trying to get by.”

Parents with these challenges are more likely to persist with sensitive parenting if they take advantage of parenting classes and commit themselves to sticking with the behaviors despite the stressors around them. Gibbs and Forste recommend that disadvantaged parents and those advising them (such as parents, pediatricians, and clergy) find parenting programs in their communities or online to provide extra support and information.

Recently Yvonne was out of town for a few days. When she returned and her daughter Ellie saw her approaching at the airport, she ran to her daughter as fast as she could.

“I’m not a perfect parent and in some moments I think I don’t like my children very much and they don’t like me either, but at that moment I felt the love and deep bond we have,” says Yvonne.

When she’s able to follow her children’s cues, she finds their interactions are more meaningful and there’s less conflict in their home. “I notice that when I’m not picking up on their cues, I’m more going off my pride. Staying tuned in to them helps me humble myself and allows the Spirit to be more present. I don’t go off on my preconceived judgment about the situation, and I can discern the real issues.”

Marc says he’s getting better at picking up on his own inner cues, and that benefits both him and his family. “I notice that I feel frustrated when I’m not understanding my children and their needs. They’re trying to communicate, but I’m not listening. As I stop to listen, I recognize new ways to approach the situation. As I do this, our relationships are strengthened and they’re happier and I’m happier.”

• View feeding time as personal interaction time, whether breastfeeding or not.

• Read to your child every day, beginning no later than 9 months of age.

• Manage your time so you can give individual attention to each child.

• Be humble about what you know and don’t know about your children. Be willing to let them teach you about who they are and what they need.

Princesses, Superheroes, and You

Exploring the fantasy of mythical role models and the reality of our royal identity.