On the evening of April 2, the United States lost its first fighter-jet pilot during Operation Iraqi Freedom. Lt. Nathan D. White, ’97, was flying his F/A-18 C Hornet when he was hit by a Patriot missile during a friendly-fire incident over Iraq. 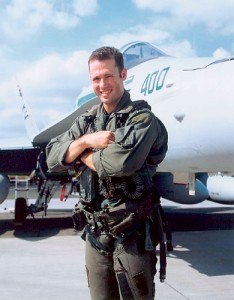 Lt. Nathan D. White flew an F/A-18 C Hornet in the U.S. Navy and was killed when his jet was shot down over Iraq on April 2, 2003. Photo Courtesy of the Nathan White Family.

As he was returning from a successful bombing mission, White radioed that he was being tracked by two missiles. He proceeded with an evasive, high-G turn, but his jet was hit within five seconds.

“Over 200 pounds of explosives tore away the entire front of the plane and catapulted Nathan, strapped in his ejection seat, away from his jet. The force killed him instantly,” says his father, Dennis White, who flew C-130 transports in Vietnam three decades ago.

White, age 30, flew with the Strike Fighter Squadron 195 and was missing for 10 days before rescue crews located his body in a lake west of Karbala, 50 miles south of Baghdad.

Lt. White, the ace pilot his Navy shipmates called “O. J.,” was buried on April 24 with full military honors at Arlington National Cemetery. At the service White’s widow, Akiko, was presented with her husband’s Purple Heart award and the flag that had shrouded his coffin.

“Arlington was the right place for Nathan,” says Ana White Mitchell, ’93, White’s older sister and an assistant teaching professor of dietetics at BYU. “It is where the heroes of our country are buried.”

Memorial services were also held aboard the USS Kitty Hawk and at the Naval Air Facility in Atsugi, Japan, where White was stationed. 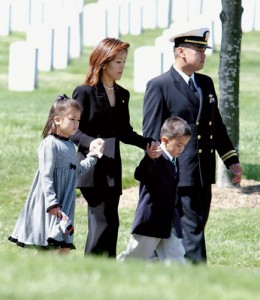 White, raised in Abilene, Texas, was an accomplished athlete and graduated from Cooper High School in 1991. He finished one year at BYU—Idaho before completing a full-time mission in Osaka, Japan. He met his wife while conducting Japanese-language tours in New York City, and they married in 1995.

White graduated with honors from BYU in 1997, earning his bachelor’s degree in Japanese. Following graduation, he was accepted into the law schools at BYU and the University of Texas. White first decided to follow his father’s path in military aviation, joining the Navy flight school in Virginia. He earned his gold wings in 1999 and graduated at the top of his F/A-18 class.

“In 30 years Nathan did more than most people do in a long lifetime,” Mitchell says.

White leaves behind his wife and three children: Courtney (age 7), Austin (6), and Zachary (3).

A family friend established a Web site, ltnathanwhitechildrensfund.org, featuring tributes, news articles, and information about a fund established for White’s family. Also requested are anecdotes or recollections to include in a book of remembrance.

“It will help the children remember Nathan,” says Dennis White. “Hopefully, when his children read about the war in Iraq, they will feel that their father had a part in their freedom.”

More information can be found at more.byu.edu/pilot

A Lofty Honor for Ainge

Repaying a Debt of Gratitude

A defining experience with President Holland taught Carr C. Krueger valuable lessons and ultimately led him back to BYU.