A communications professor explores the ethical dilemmas that abound in the world of public relations.

When the reporter from the New York Times called, Tom (name changed) was in Australia at the 2000 Olympics. The public-relations representative for a major corporation on the East Coast, Tom regularly fielded queries from the media—even during vacation.

But this call put an excruciating spin on the perfunctory Q&A routine as the reporter pressed Tom for critical financial information regarding his company. Hanging up the phone, Tom found himself face-to-face with an ethical dilemma of Olympic-sized proportions: tell the truth and his employer could suffer a staggering financial blow; conceal the desired information and stockholders could be blindsided down the road.

“Every practitioner in the study faced ethical dilemmas,  from being told to tell outright lies to withholding information.” –Brad Rawlins

With his bosses scattered across the globe and unavailable for input, Tom grappled with the decision, and, later that day, decided to share the same information he would be obligated to tell a financial analyst. After all, Tom reasoned, if he could tell this to an analyst, why not a reporter? The following day’s edition of the Times ran the story, causing the corporation’s stock to plummet faster than a diver from a 10-meter platform.

One vexing decision—hundreds of millions down the drain.

Far from this PR predicament in the Land Down Under, BYU associate professor of communications Bradley L. Rawlins leans back in his chair as he tells the story amidst the mounds of books and random sports memorabilia that constitute his academic realm. Rawlins’ work has brought him into contact with numerous PR practitioners who, like Tom, face various dilemmas—from whether to reveal to employees why executives were fired to whether they should accept work from clients with conflicting ethical standards.

Having done award-winning research on how PR practitioners handle ethical dilemmas, the research-savvy Rawlins, a former public-relations practitioner himself, is keenly aware of the ethical battles his comrades regularly face; and while he’s no longer in the trenches, his research helps arm present and future PR professionals with the moral mettle they may need one day to make their own million-dollar decisions.

While volumes of ethics research have been completed in other fields, ethics in public relations has remained largely uncharted terrain until recently.

“The true exploratory research on how individuals in public relations make moral decisions and what’s influencing those decisions had never really been researched in our field,” Rawlins says.

So shortly after arriving at BYU in 2000 from James Madison University, Rawlins packed his bags and set off in search of answers. From spring 2001 to fall 2002, he and his coresearcher, BYU assistant professor of communications Kevin L. Stoker, ’81, traversed the country and interviewed 31 public-relations professionals. The two posed a series of open-ended questions about ethical challenges and asked how the practitioners resolved these dilemmas. Regardless of the practitioner’s age or experience or organization, the occurrence of ethical quandaries was consistent. “Without exception, every practitioner in the study faced ethical dilemmas, ranging from being told to tell outright lies to withholding information to key publics,” Rawlins states in a review of his work.

The number one dilemma, as in Tom’s case, was deciding how, when, and to whom information regarding a product or company should be disclosed.

“My research looks at how individuals make moral decisions, how public relations can help organizations become more transparent,” Rawlins says. Transparency, he explains, is making one’s decisions and actions public. “Transparency is the real moral imperative of public relations. Too often, organizations try to make their decisions and policies in the dark, and keep their behavior secret.”

To categorize the data from their research, Rawlins and Stoker classified 125 statements from their interview transcripts according to a test developed by noted Harvard philosopher Sissela Bok. Her formula specifies three levels for public justification of ethical dilemmas: consulting one’s conscience, seeking input from expert or trusted sources, and the highest level, consulting with people affected by the decision.

Rawlins and Stoker’s research found that 26 percent of respondents made ethical decisions according to conscience; 22 percent consulted peers; and only 9 percent reached the highest level of consulting those affected by the decision.

Rawlins is careful not to overgeneralize the results of his findings. While it shows there is no dearth of moral dilemmas, he still thinks unethical behavior remains the exception rather than the rule. But armed with proof that room for improvement exists, Rawlins, with the help of Mark J. Carpenter, ’85, a PR practitioner at Symantec, is developing a scale that measures transparency, allowing companies to see where they stand ethically and find areas for improvement.

Head and Shoulders of a Body of Work

For his research, Rawlins was awarded the Pathfinder Award in November 2003 by the Institute for Public Relations—the highest honor given in the public-relations research field. Typically bestowed on researchers in the golden years of their careers, the distinction is made even more singular by Rawlins’ being the youngest recipient in the history of the award. 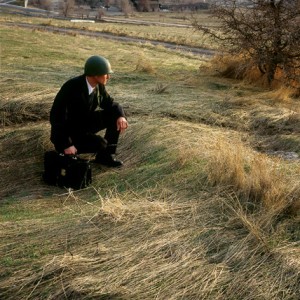 A communications professor explores the ethical dilemmas that abound in the world of public relations. Photo by Bradley Slade.

Jack Felton, CEO of the Institute for Public Relations, says part of what makes Rawlins’ work outstanding is the applicability of the research in today’s business world. “I think his calling people back to being ethical and honest in dealings with relationships is the kind of thing that’s needed by corporations,” says Felton. “His research tells us that we’re doing some things extremely well but that there are a number of things that we need to improve.”

In a public-relations paradox, the humble Rawlins is quick to deflect attention from himself and remains surprised at receiving the award, good-naturedly offering that he has really only put together a “head and shoulders” of a body of work. He says the award has motivated him to take his research even further.

Rawlins is keenly aware of the ethical battles his comrades regularly face, and his research helps arm present and future PR professionals with the moral mettle they may one day need.

Don Stacks, director of the advertising and public relations programs at the University of Miami’s School of Communications, says Rawlins’ research calls for a fresh look at ethics. “We need to reconsider our ethical standards,” he says. “Public relations is both a corporate and an individual issue. When you’re talking about ethics, you’re talking about something that applies to everybody, whether it’s ethics as a practitioner, an educator, or a writer.”

Along with sounding the clarion call of change among PR professionals, Rawlins’ research is carrying over into the classroom. During his interviews Rawlins discovered that most PR representatives didn’t receive ethics training in college, and he has noted that many communications students feel they will have to make ethical compromises in order to be successful.

“I want the education process to be a real influence in my students’ moral behavior after college,” says Rawlins, who teaches a communications ethics class. “I want them to make commitments about what kind of ethical behavior they will and will not engage in.”

He hopes his students will realize that every decision has a moral angle, whether they consider it or not. “I want to enhance their moral sensitivity and their moral courage,” he says.

Expounding on that thought, Rawlins reflects back on Tom, who nearly lost his job for acting ethically but said he would act the same if he had to do it over again.

“That’s what I mean by moral courage,” says Rawlins, “having the courage to make decisions when they’re the toughest to make, even when you may not be backed up by others when making that decision.”

Let us all have joy for each new life that comes into the world.