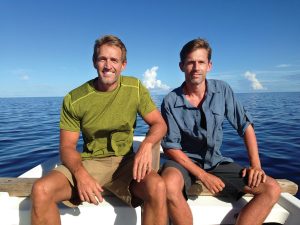 Alum Jeffry Flake (left) and Martin Heinrich, senators on opposite ends of the political spectrum, spent six days working side by side on a deserted island to make a point. Photo Courtesy Jeffry Flake.

During a long night of voting on the floor of the U.S. Senate, Arizona’s Jeffry L. Flake and New Mexico’s Martin Heinrich started chatting. Flake (BA ’86, MA ’87) told Heinrich about two weeklong survival trips he had taken to uninhabited Marshall Islands, and the pair, both outdoor aficionados, swapped spearfishing photos. They joked about doing an adventure trip together, and the joking soon turned to planning when they decided to travel to the Marshall Islands for six days and six nights.

It was an unusual pairing: Flake, a Republican, and Heinrich, a Democrat, had already voted against each other 74 times during their short time as freshmen senators. “I’ve known Senator Flake for a number of years, but we . . . come at things from very different points of view,” Heinrich told the Discovery Channel, which sent a film crew to capture the duo’s undertaking.

Rival Survival documented their efforts to work together as challenges piled up. After swimming to a deserted island from their drop-off boat, fighting harsh currents and passing by sharks, Flake and Heinrich were hit by a downpour. With just a short window before sunset, they immediately joined forces to build a shelter. And though Flake didn’t miss a chance to take playful jabs at his partner’s political party, he still gave Heinrich his due: “He helped build [it], built the structure and everything, so I applaud him.”

Building a shelter was the first of myriad survival challenges. Over the next five days, they struggled to find water in 100-plus-degree temperatures and eventually resorted to sipping drops of water in palm fronds and filtering a bucket of dirty, larvae-filled water through Heinrich’s shirt. They were unable to spear any fish and so settled for coconuts and clams for food. And because neither could light a fire, they ate their clams raw.

The show documented a few minor disagreements between Flake and Heinrich. When producers allowed them to choose three survival aids, Heinrich campaigned for a battery—which could have helped them start a fire—but Flake won out on a slingshot—which ultimately proved useless in their fish-hunting efforts.

But cooperation generally trumped squabbling. One watched for sharks while the other dove for clams; Heinrich woke Flake to warn of an approaching large-clawed crab. “Out here it doesn’t matter if you’re a Republican or a Democrat; you just want to survive, and you have to help each other to do that,” Flake said.

They left the island at the end of their six days sunburned, bug-bitten, banged up, and a few pounds lighter—but alive. The takeaway? “Republicans and Democrats can rely on each other, can trust each other—that’s what this week proved,” Flake said.

After the show aired, skeptics questioned whether their island rapport would translate to Senate cooperation. But the two have since collaborated on a major bill with significance to both Arizona and New Mexico.

Heinrich says the trip helped build trust, which is “[foundational to] find common ground in order to make compromises.” The senators believe Congress members—especially those from different parties—need more opportunities to interact to foster this trust. So the two recently organized a lower-stakes opportunity for engagement: a bipartisan lunch for members of Congress and their families.

Ultimately, Flake says, he learned—and hopes others will too—that “compromise isn’t a bad word, and it should be used.” —David J. Munk (’15)