As a student, Todd A. Harris (BA ’90) enjoyed learning to snowboard on the slope outside the Grant Building. Within a few years he would enjoy announcing snowboarding events for ESPN. Now with NBC, Harris is scheduled to be the play-by-play announcer for all snowboarding events at the 2014 Winter Olympics in Sochi, Russia.

Harris came to BYU fully expecting to study biology as a pre-med major, but his discomfort with blood—particularly the idea of making an incision—prompted a change. He had been a standout athlete and the newspaper sports editor at his high school in Portland, Ore., so he happily traded a scalpel for a microphone.

It was a good decision. He has covered everything from the World’s Strongest Man competitions to ball and stick sports, major cycling and sailing events, and the Olympics. 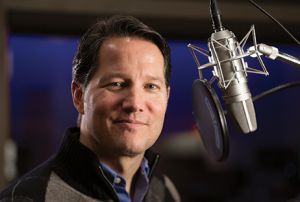 He says traveling has been a bonus. “The famous newsman Charles Kuralt used to do ‘On the Road’ for CBS and said it was great to see the world and have someone else pay for it,” Harris says. “I feel the same way, and sports has made that possible.”

Harris says his career success is due in part to BYU, where professionals in the industry shared their expertise with students. “I would love to share my insights into how to become a sports broadcast journalist,” he says. “A lot of the best help comes from hands-on insights, not from a book.”

Harris started out at a news job in Bowling Green, Ky., where he worked as an anchor, reporter, writer, and producer. “I learned all the positions at a small station,” he says.

In 1992 Harris entered the pro sports arena as a freelance host and reporter for ESPN covering what were then considered fringe sports: snowboarding, skateboarding, surfing, and jet skiing.

He knew Bowling Green would soon be in his rearview mirror after a production company requested him for a world surf tour. “They asked me if I was okay with that,” he explains. “I thought, ‘Hmm. I could go to Barbados for a week or I could stay in Bowling Green and cover a domestic violence case.’”

Harris later became a college football sideline reporter for ABC and worked with Keith Jackson, who had a 40-year career with ABC Sports, and Dan Fouts, football Hall of Fame quarterback and former NFL analyst. Harris now works for NBC, where, he says, “they treat me like family. I just love what I do.”

A sampling of recent assignments includes hosting the network’s coverage of the 100th Tour de France, followed by hosting NBC and NBCSN’s coverage of the 34th America’s Cup from San Francisco, in which the American sailing team came all the way back from an eight-race deficit to retain the oldest trophy in international sports.

“What I get to do is incredible,” he says. “When I pack for Sochi, the first thing I’ll put in my bag is my snowboard.”

Besides snowboarding, Harris still cycles and plays basketball. He has played every sport he has covered except sailing. “When I covered America’s Cup, I had to study especially hard before I worked the event. This is the Super Bowl for these athletes, and if you don’t know your stuff, they know. I did not want to be the weak link in the chain.”

Harris’s wife, Keri Montgomery Harris (’93), fell in love with sailing and tells him that when it comes time to retire, they are going to take up the sport.

“I don’t know whether we’ll be in Bear Lake, Laguna Beach, or Portland,” he says, “but I’m sure we will become the old folks of the sailing world.”