By Olivia Palmer in the Winter 2000 Issue 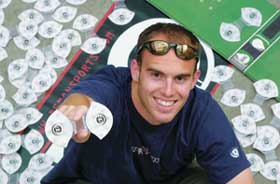 While many snowboarders exchanged snowy slopes for crashing waves last summer, snowboarding suppliers were gearing up for their winter season. And for once BYU economics major Brent R. Davidson was glad not to be one of the beach bums.

Since attracting the attention of snowboarding suppliers at a trade show in March, the Stomplock, a snowboarding accessory Davidson dreamed up more than a year ago, has garnered about 7,000 orders. With demand on the rise, the Danville, Calif., native is scrambling to fill retailers’ requests.

“To see the final product packaged is a dream come true,” he says.

Davidson’s brainchild, which he envisioned after noticing a problem with snowboard theft, is a clever variation on the stomp pada spiked snowboard attachment that gives snowboarders the traction they need to clean icy boots and maintain footing when coming off a lift. Made of rigid plastic, the bow tie-shaped Stomplock sports a unique, raised center that forms a space through which a snowboarder can run the cable of a lock before heading to the ski lodge.

Dave Wilderotter, owner of Dave’s Snowboards in North Lake Tahoe, Calif., is carrying the Stomplock because of its locking feature.

“Snowboard theft is huge,” says Wilderotter. “There was a company that used to sell a locking device for snowboards, but it was too big and bulky. This is a great idea. You’re going to need a stomp pad anywaywhy not kill two birds with one stone?”

As good as his idea seemed, however, there were times when lack of money almost kept Davidson from pursuing his dream.

“I made my first model of the Stomplock out of Play-Doh,” he says. “After I had written the business plan, I stalled for two months because I didn’t have any money. There was a period when I really felt like trying something else, but my wife encouraged me not to give up.”

After six months of designing the Stomplock, Davidson enlisted the help of his brother Keith, a UVSC student, and formed the company Demon Sports.

“We bought some software and taught ourselves how to design a Web site,” says Davidson. “After we developed the site, we e-mailed it to around 50 dealers so we could get feedback. Only 15 responded, but of those, around 10 were very positive, so we decided to keep going.”

The group’s big break came in March, when they decided to take part in the SnowSports Industries America annual trade show in Las Vegas.

“All the big companies in snowboarding were there with fancy booths and famous boarders signing autographs,” says Davidson. “We had spent $2,000all the money we hadon the license and participation fees, so we camped out at a friend’s house, survived mostly on bagels for six days, and had this little 10-by-10-foot booth. It could have been miserable, but we were excited because our table was flocked with people.”

The fledgling company returned home with orders for nearly 3,800 Stomplocks. Since then, Demon Sports has introduced five new colors for the Stomplock and released other snowboarding accessories, including backcountry gloves with a built-in compass and the Zombie, a small carrying pack that attaches to the back of a snowboard binding. Their products are selling through about 50 retailers in the United States and four other countries.

Motivated by his first taste of success, Davidson will run his company full-time after he graduates in December. Later he plans to apply for business school.

“Going from making Play-Doh molds to seeing your idea making money is incredible,” he says.

“A Do-Gooder of the Best Kind”

All of God’s children—including you—need to hear these precious truths from Dieter F. Uchtdorf.

A Celebration for BYU

The inauguration of Elder Samuelson as BYU's 12th president honored the university community as well as its new leader.