She probably won’t ever appear in television commercials or coach her team in front of 65,000 fans. It’s doubtful she will ever become famous, even on BYU campus. Not that it matters to Elaine Michaelis, who is unofficially the LaVell Edwards of the women’s athletic department. 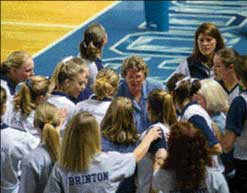 Like Edwards, the longtime BYU football coach, Michaelis, BYU’s longtime women’s volleyball coach, possesses a fiercely competitive spirit that is belied by a stoic countenance during games. Like Edwards she conducts herself with class and humility. Like Edwards she has put the sport she coaches at BYU on the national map and is deeply respected by colleagues around the country. And, like Edwards, over the years she has compiled a record that, in terms of wins and championships, is staggering.

Yet the numbers Michaelis has amassed only begin to tell the story of her success and longevity.

Since 1969 she has taken her teams to 20 or more victories in a season 25 straight times. She has guided the Cougars to 25 national championship tournaments. She has posted 813 victories, making her the second all-time winningest coach in Division I women’s volleyball, trailing only UCLA’s Andy Banachowski. She has reached an eye-popping 323–31 mark in conference matches.

Can you imagine what those numbers might be if records had been kept since 1961, the year she began coaching at BYU? Trouble is, Michaelis began her coaching career back in the Dark Ages of women’s sports record-keeping (and, by the way, a year before Edwards became an assistant coach at BYU). While she was winning matches like crazy, nobody bothered to write it down. It wasn’t until 1969 that records were kept. Michaelis, who also serves as the women’s athletic director, was simply light years ahead of her time.

So last fall, when she officially coached her 1,000th match, she was grateful to be honored but she shrugged it off as a pseudo-milestone.

“It’s kind of hard for me to get excited about it,” Michaelis said after the Cougars downed the Idaho State Bengals in four games before a modest crowd of 597 fans and amid little fanfare at the Smith Fieldhouse in October. “It already happened years ago. We just don’t know when.”

Those who know her, meanwhile, marvel at what Michaelis has accomplished. 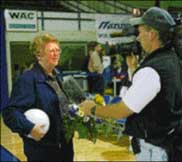 Though she hasn’t sought the spotlight, in her 37 years as head coach, Michaelis has put BYU women’s volleyball on the national map.

“It’s a great achievement,” says BYU associate athletic director Pete Witbeck, who has been at the school since the 1950s. “It’s a good lesson about enduring to the end. She’s an outstanding coach, administrator, and person. The world needs more Elaine Michaelises.”

“She’s completely different from anything I’ve ever experienced,” says junior outside hitter Mari Burningham Carpenter, who played for a season at UCLA before transferring to BYU. “She’s very honest and, I would say, noble. You want to play your guts out for her. I love her and have a lot of respect for her.”

You’d think Michaelis had seen it all during her 37 years at the helm of the juggernaut that is Cougar volleyball, having never missed a game. But every year brings new challenges and new experiences, which is precisely why she continues coaching.

The 1998 season had plenty of breathtaking moments. Take Nov. 30, for instance, when the Cougars played Hawaii for the WAC Championship, which turned out to be the mother of memorable, marathon matches. Hawaii outlasted BYU, 15–12, 21–19, 13–15, 16–18, 24–22. It was roughly the equivalent of a basketball game going into six overtimes. The match lasted 3 hours and 38 minutes.

“That’s one of the best volleyball matches I’ve seen in my career,” Michaelis said afterward, “and that’s going back a long way.”

BYU went on to earn a berth in the NCAA Tournament for the 17th time in 18 years, with a No. 2 seed. For the second consecutive season, though, the Cougars eventually fell to Penn State on the Nittany Lions’ home court, bringing to a close another stellar campaign and thwarting BYU’s bid for the Final Four. In 1993 Michaelis led BYU to its first and only Final Four appearance.

Even at season’s end, though, there’s no time to sit back and reflect on what she has achieved. “The years kind of roll together,” she says. “There’s no stopping point. We’re always recruiting, then there’s spring practice, and then another season. It’s what I enjoy doing. The game is so great. It’s where I like to be.”

Unlike Edwards, Michaelis labors in relative obscurity–which is exactly the way she likes it. Not that she’s been completely ignored. In 1994 she received the Dale Rex Award, given annually to the person who has contributed most to amateur athletics in Utah, making her only the second woman to garner that award in its 49-year history.

Throughout her career, BYU’s program and its players have been recognized, which is what matters most to her. She has coached a bevy of All-Americans, including Rogers and former stars like Amy Steele Gant, and she has guided BYU to numerous top-10 finishes.

Still, one goal eludes her–one that Edwards has already secured. “We’d like to get that national championship,” she says. “We’ve knocked on the door a few times. One of these years, maybe we’ll get it.”

And maybe one of these years, if BYU earns that title, someone will refer to LaVell Edwards as the Elaine Michaelis of the men’s athletic department.

Jeff Call, a 1994 BYU graduate, is a sportswriter for the Deseret News.