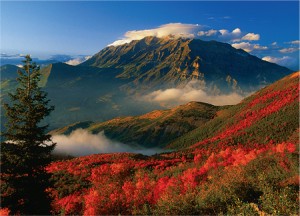 After 15 years of hiking around Timpanogos with a camera, Willie Holdman has put his photographs of the mountain into a book.

It would be a rare occasion if even an avid hiker crossed paths with freelance photographer William F. Holdman Jr. (BFA ’94). “I go to remote areas where taking photos requires effort and sacrifice,” he says.Among those places is Mount Timpanogos, and the results of 15 years of giving particular attention to the majestic peak are showcased in his new book, Timpanogos.Holdman was introduced to photography at a young age accompanying his father, a professional photographer, on assignments for National Geographic. “Sometimes I felt the reason I came along was to carry his tripod, but he also mentored me,” Holdman says. Now he carries his own tripod.Before planning a photo shoot he watches the weather and makes adequate preparations. “You have to know your limitations when traveling alone,” Holdman says. “When I am out in the field, my wife understands I’ll never be home in a few minutes. It usually turns out to be a day or two.”“Most people are not willing to hike for hours or days to take pictures,” Holdman adds. He works autonomously and prefers partly cloudy days when shooting. There have been occasions when he set up for a specific shot and something more dramatic happened in the same area. “Nature’s mood changes so rapidly—you have to be ready to adapt,” he says.Holdman’s work has gained recognition. When actor Robert Redford saw one of his pictures hanging in the general store at Sundance, for example, he asked about the photographer because he had never seen that shot of the nearby mountain. The store manager told Redford that it was “one of Willie’s” and that Holdman was participating in a Sundance art show. Redford liked the prints of Timp so well that he purchased several. “I used the money as a down payment on my first home,” Holdman says.

A renowned religion professor for more than 4 decades, Cowan is guided by insightful perceptions of the world around him