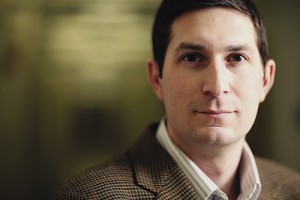 The United States has a glut of natural gas,” says chemistry professor Daniel H. Ess (BS ’00)—a “glut” of daily natural gas production that could supply nearly 700,000 U.S. homes for an entire year. The problem: “We don’t use it all that well,” says Ess. Many fossil fuel producers opt to burn off the natural gas that is piped up from underground at the same time as valuable petroleum; transporting natural gas is much more expensive and not as versatile in use as petroleum. But Ess and a team of BYU researchers joined forces with researchers at the Scripps Research Institute in Florida to fix that problem.

In research published in Science, the team discovered a new way to chemically convert raw natural gas into liquid alcohol. “If you can chemically convert natural gas to a liquid, you’ve upgraded it into a much more useful and worthwhile product,” says Ess. There is the potential to use liquid alcohols from natural gas to more easily produce electricity and to create plastics, found ubiquitously in packaging and products. Currently, the conversion from gas to liquid alcohols is done using temperatures upwards of 1,300 degrees Fahrenheit or with expensive transition metal catalysts, like gold or platinum. The new method achieves conversion to liquid alcohol by using more abundant and cheaper main-group metal catalysts, like thallium and lead, and temperatures around 400 degrees.

The process, which the team is now working to make commercially viable, can also be done at a fraction of the cost of earlier methods—a characteristic that may lessen America’s dependence on oil and thus lower pollution. “There’s so much natural gas in the United States . . . that we may move entirely away from petroleum,” says Roy A. Periana, director of the project at Scripps.

BYU researchers have taken a major step toward improving the process for at least one important cancer drug.

The Price of Pollution