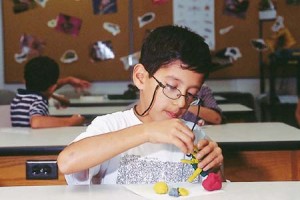 A participant in the Bean Museum’s summer programs takes advantage of craft time to create his own animals.

AT BYU‘s Monte L. Bean Life Science Museum, kids are getting to know our planet’s inhabitants, including some of the more frightening ones—snakes, spiders, and parasites—and their parents couldn’t be happier. It’s all part of two long-running BYU community programs, Saturday Safari and Wildlife Adventures, designed to give children between the ages of 5 and 10 the chance to learn more about biology. And if they happen to have a lot of fun in the process, well, that’s okay, too.“We want kids to learn more about the world around them, to be involved, and to get excited about it,” says Leanna K. Allen, ’03, who directs Saturday Safaris. “We teach them about everything from the largest mammals to the smallest organisms, including endangered species, and the ways they can protect the world around them.”On a given program day, registered children arrive at the Bean Museum, wish their parents well, and then spend a half-day with a group of up to 16 peers, exploring the earth’s natural curiosities. And thanks to the Bean Museum’s wide resources, they get to meet the subject matter on more intimate terms than would normally be possible, including seeing the animals at the museum itself, or going on field trips to places like the Hogle Zoo, the Natural History Museum, or the Timpanogos Cave National Monument.“They’re wonderful classes and great activities,” says Karen Carter MacFarlane, ’83, who has had several children participate in the programs over the years.Karen’s daughter, Caroline, agrees wholeheartedly, saying that the program is “a little bit more funner” than an amusement park. After finishing a Wildlife Adventures field trip to a local planetarium, she excitedly recalls that “they made us feel like we were actually going to Jupiter.” 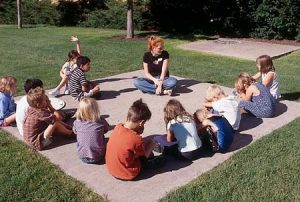 Children on a Saturday safari listen intently as Leannna Allen explains a few of the wonders of the natural world.

Occasionally, the programs even catch the attention of the student body. On one particular occasion, a small but curious crowd gathered to watch as a group of children, who had already constructed a lean-to on the lawn, hid themselves in the bushes near the Abraham Smoot Building and began to shout and bang pots and pans together. The children were role-playing a survival excursion, and a bear had just stumbled into their camp.While Saturday Safaris runs year-round, Wildlife Adventures is strictly a summer program. And although both programs may have already inspired future biologists, Allen is quick to point out that “whether or not this happens, we just hope that kids have a good time and learn something.”

In The Mayan Jungle

In a World War II prison camp, Ray learned to survive. In the jungles of Central America, he put that skill to practice.