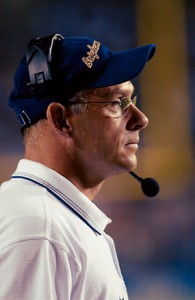 Strategy and chemistry combined to lead the Cougar football team to a season of miracles.WANT to know the secret behind the BYU football team’s success? Brandon G. Doman, ’02, has the answer. “I think it’s destiny,” says the senior quarterback.How else do you explain what D. Gary Crowton, ’83, accomplished in his first season as BYU‘s head coach? In December 2000 he inherited a team that had posted a 6-6 record. Crowton’s 2001 Cougars went 12-1 in the regular season, claimed the Mountain West Conference (MWC) title, garnered a top-10 ranking, and led the nation in scoring.The Cougars may have also led the nation in miraculous finishes.Prospects seemed bleak when BYU trailed archrival Utah 21-10 with 5:47 remaining. The Cougars had the ball on their own eight-yard line. On the sidelines BYU linebacker Justin P. Ena, ’02, brimmed with optimism. “Put a smile on your face and have fun, because we’re going to pull it out,” Ena told his teammates. “I don’t know how we’re going to do it, but we’re going to do it.”xSure enough, with a perfect season and an outright MWC title on the line, BYU did it. Running back Luke T. Staley, ’03, capped a 92-yard drive with a seven-yard touchdown catch from Doman. Then he scored the two-point conversion. After the Cougar defense shut down the Ute offense, Staley took a pitch from Doman and skirted 30 yards down the sideline for the game-winning touchdown with 1:16 left. BYU won, 24-21. 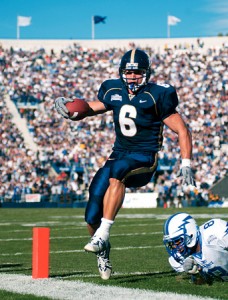 Luke Staley ran past defenders all season, racking up 28 touchdowns and 1,596 yards while capturing the Doak Walker Award as the nation’s best running back.

Fourth-quarter heroics became almost routine as the Cougars also survived close calls against UNLV, New Mexico, Mississippi State, and Wyoming.“When things get bad, no one doubts we’re going to win,” center Jason S. Scukanec, ’02, said after the Cougars edged the Cowboys, 41-34.“The best part about it is walking into the huddle, looking at these 300-pound guys, and knowing that in their hearts they believe they’re going to win the game,” Doman says. “It makes it so much easier to make big plays. The guys step up, they block a little bit harder, and you win. There’s a little bit of destiny involved when teams start to have that kind of chemistry.”However, the Cougars’ success was not merely left to fate or chance. Crowton was methodical about creating an atmosphere conducive to winning.One of his first moves was the hiring of Jay Omer, a strength and conditioning coach with whom Crowton had worked at Georgia Tech. The Cougars attribute much of their late-game magic to being in better shape than their opponents.Under Crowton the Cougars have also gone digital, purchasing a high-tech software system that facilitates breaking down game film and preparing for opponents. It’s made things like chalkboards andVCRs obsolete. BYU is one of only three schools to use the system, but count on others to follow suit.Crowton is a firm believer that football games are won by working hard Monday through Friday. “It’s in the preparation, it’s not in the game,” Crowton says. “If a sense of urgency is there in preparation, then you are prepared.”Crowton is quick to credit R. LaVell Edwards, ’78, for leaving him talented players. Staley has shattered the school touchdown record and received the 2001 Doak Walker Award as college football’s best running back. Doman was among the nation’s leaders in total offense and passing efficiency.Of course, a little bit of destiny doesn’t hurt either. “We set lofty goals,” Crowton says, “but this is a special team.”

Jeff Call is a sportswriter for the Deseret News.

Readers remember the adventures, battles, and friendships they experienced with college roommates.