Readers remember the adventures, battles, and friendships they experienced with college roommates.The Importance of FudgiesCindiLee Turpin-Thomas, ’80, Den Haag, The Netherlands 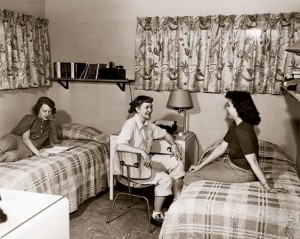 Inhabiting the same space for a semester or more, college roommates often learn as much about interpersonal communication, economics, and group dynamics at home as they do in class.

I had many wonderful and interesting roommates in my four years at BYU, but the one who comes most readily to mind—probably because of the effect she had on the way I look at things and even on some of the phrases I use—was Laurie Deardon (now Deardon-Couch), ’85. Laurie was from Minnesoooota (that’s the way she always said it, and the way I say it to this day) and had the most rosy outlook on life. I seldom saw her without a huge smile, and an infectious, musical laugh was always close at hand. She also had a knack for interesting sayings. When wanting to inquire if someone is ready to go or move on with something, I still find myself asking, “Soooo, howya doin’ on yer pop, there?” But the Laurie story that makes me smile the most was the day I’d gone to Carson’s Market (now the Creamery on Ninth) and picked up a bag of Kraft Fudgies. Laurie came in from class, saw the Fudgies on my desk, and said, “Those fer us?” When I nodded affirmatively, she lit up, exclaiming, “Oh, Fudgies are what life is all about!”I laughed so hard that I nearly fell out of my chair. And I saved all my silver Fudgie wrappers from that bag so that, when it was empty, I could cut block letters from them and present Laurie with a poster exclaiming, “FUDGIES ARE WHAT LIFE IS ALL ABOUT!” It was such a perfect expression of her joy in simple things.I’m told that the poster went to France with Laurie on her mission. I wonder what the French made of that.The Adventures of Nila and ParaleeNila Morrow Blackham, ’84, Orem, UtahI was a little nervous about what kind of roommate I would end up with my first semester at BYU, but I was too psyched about coming to college to worry much about it.As it turned out, worry was needless. The Helaman Halls housing office used advanced methods of matching to pair me with the perfect roommate. They took the two weirdest names on the list (Nila and Paralee) and put them together in the same dorm room. (Our R.A. actually confessed that this is what they had done.) With that much in common, Paralee and I went to work to become friends.We soon found that we had one big thing in common. Both of us felt the vague, wistful desire deep inside to cut loose and be kids while there was still time. The upperclassmen didn’t take us seriously, anyway. They seemed to expect freshmen to act like children. Now was our chance!One of our first freshman adventures involved the girls across the hall, Cindy and Carol. Carol was “older”—probably 19—and consequently was dating returned missionaries. She had set up her young and sporty roommate, Cindy, on a blind date with her RM boyfriend’s roommate. Carol was a little bit condescending about this, acting as though she were bestowing queenly favors upon a pauper. Cindy was too good-natured to mind, but it really irked Paralee and me. We saw it as a judgment against “immature” freshmen. So we set out to prove the judgment correct!The boys were to meet the girls in the dorm lobby at 6; Carol was planning to be a little late and make a grand, theatrical entrance with Cindy. Paralee and I beat them to the punch. We were there waiting at 6, when the two unsuspecting boys arrived. We had curlers in our hair, cold cream on our faces, and were wearing our fuzzy bathrobes and slippers. As a crowning touch, we had each blacked out one of our front teeth. We knew the boys’ names because Carol had been talking about them incessantly for days, so we called them by name as we rushed forward to greet them. I pretended to be Carol, and loudly and elaborately introduced “Cindy” to both of them. We went on and on about how excited we were to be going out with them, stalling until the real duo arrived. They did, about five minutes later, and the look on Carol’s face was worth money in the bank. She didn’t speak to us for days after that, which was an added bonus.Just before Christmas vacation that year, Paralee and I decided to go Christmas caroling at the president’s house, which at that time was right on the west edge of campus. Dallin H. Oaks was president at that time. I’m sure it’s no coincidence that BYU presidents no longer live in that house—we weren’t very musical. 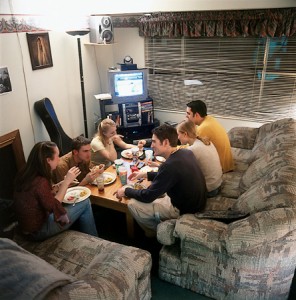 Alumni take a moment to reflect on the memories they made at BYU.

There are fans, fanatics, and fan antics. We have all three in these tales from BYU alumni.

These eager BYU students didn’t wait for graduation to “go forth.”