By Karen Snow in the Spring 1996 Issue

Leading out among university news services, BYU’s Communications Department went on-line with the nation’s first student-run multimedia Internet news service as a result of joint efforts by the print and broadcast journalism programs. 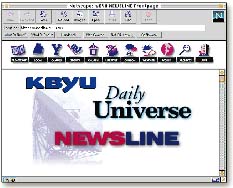 Students from The Daily Universe and KBYU collaborated to create the daily news site @BYU Newsline (https://newsline.byu.edu), which replaced a weekly electronic publication called @BYU in January. Although other universities have developed electronic versions of their newspapers, BYU is the first to combine its newsrooms by utilizing the products of both its print and broadcast journalism programs. On the Newsline web page, Internet browsers can access not only print articles from The Daily Universe but also sound and video clips from KBYU broadcasts.

“We are getting students involved in experiences that will prepare them for changing landscapes,” says Bill Porter, the BYU journalism program director. “Newspapers and broadcast stations are experimenting with what once were narrowly defined specialties.”

Porter says the objective of the on-line publication is to train students with the skills necessary to manage tasks in a diverse range of media. “We are producing graduates that will be out ahead of what’s going to happen in the industry.”

Multimedia news services, such as Newsline, are a powerful way for delivering information, Porter says. “Only a short time from now, people will go to one screen for things that they now go to the TV, telephone, and library to do.”

The Internet news site’s “front page” includes a lead story, news briefs of the top stories for each section of the campus newspaper, and video clips of news features from KBYU’s afternoon broadcast. Throughout the web site, articles are cross-referenced to Newsline archives to provide background material. The site is updated each day by the desk editors at The Daily Universe.

Craig Craze, on-line editor for Newsline, believes BYU alumni are a key public for the service. “It’s an easy way for parents and alumni to stay involved with BYU from different points in the world,” Craze said. “People keep coming back because the news is fresh every day.”

The service originally began as a database for the 1994 congressional elections, storing mug shots, news releases, and candidate backgrounds as a resource for newsroom reporters at The Daily Universe and at KBYU news. Porter says the home page soon was being accessed by those surfing the World Wide Web, and the newsroom received fan mail from all over the world.

The service has grown rapidly from its two-person beginnings two years ago. The department has added classes in Hypertext Markup Language (HTML), the programming language necessary to publish on the Internet, to accommodate those now involved in the service as well as other interested students.

Because the program is under development, The Daily Universe still contributes the majority of material to the service, though large feature stories utilize clips from KBYU as well. Porter says he hopes to create more joint projects as Newsline develops.

Newsline has been a booming success, say Porter and Craze. Porter reports 41,000 accesses to the cyber news pages in February, with requests coming from as far as Malaysia.

Students from The Daily Universe and KBYU collaborated to create the daily news site @BYU Newsline.

Read what's new at BYU in sports and animation.