A BYU documentary about the only library ever recovered from antiquity will air on public television stations nationwide beginning in January 2004. Out of the Ashes: Recovering the Lost Library of Herculaneum tells the story of BYU efforts to read 2,000-year-old carbonized scrolls that were burned and buried by the eruption of Mount Vesuvius in A.D. 79. 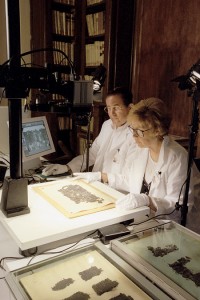 After imaging thousands of fragments in Italy, the BYU team is now working to create a permanent digital library of the papyri. Photo by Mark Philbrick.

In 1999 scholars from BYU’s Institute for the Study and Preservation of Ancient Religious Texts were invited to the National Library in Naples, Italy, to test if multispectral imaging could make visible the black text on the blackened papyri. As reported in the spring 2001 issue of BYU Magazine, their results were immediate and dramatic. In some cases the BYU team was able to retrieve text from pages that were previously thought to be blank.

“You have the application of space-age technology to texts that have not been available for 2,000 years,” says Roger T. Macfarlane, a BYU associate professor of classics and the project’s lead investigator. “All of a sudden there is new access to new texts, and that’s an exciting thing.”

The award-winning documentary, shot in high-definition, is being distributed nationally by American Public Television.