By Charlene Renberg Winters ’73 in the Spring 2003 Issue 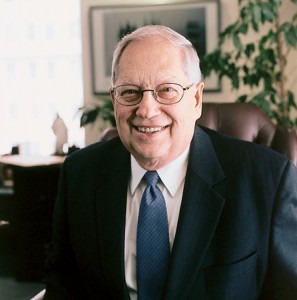 Bruce Olsen has directed the Church’s public relations efforts during a time of unprecedented visibility and dramatic growth.

Managing Church public affairs during the Hinckley years is a challenge Bruce Olsen wouldn’t have missed.AS Bruce L. Olsen, ’63, considered future plans for The Church of Jesus Christ of Latter-day Saints one recent morning, he lamented that he would retire before many of the anticipated events would take place. “How can you complain?” asked his wife. “You have had the Hinckley years.” “She’s right,” says Olsen, who serves as the managing director of Church public affairs and as the press secretary for the First Presidency. “I have had the privilege of being employed by the Church during a time of great growth, and it has been my pleasure to serve with President Gordon B. Hinckley, a leader who is brilliant, knowledgeable, and savvy. I can’t think of a better time to be so involved with the Church.” Among others, his roles have been to help people outside the Church understand it better, to ensure that publicity is fair and accurate, and to help build strong community relationships. With two degrees, public relations and consulting experience, and an extensive career as an administrator and faculty member at BYU, Olsen came well prepared to his directorship. And, he says, directing the Church’s public relations efforts during the 2002 Olympics demanded all of his skills. “This was the biggest challenge I have ever faced in terms of making my endeavors work for the Church,” he says. “I worked on it for seven years. My challenge was to find that narrow line that would be appropriate for a church headquartered in the Olympic city. We considered everything the Olympics asked of us but primarily pulled in our own programs, and they unfolded in 17 magical days in February 2002.” Olsen said reality exceeded expectations as he and his staff worked with the 1,334 journalists who registered with them. They operated a news resource center and offered 100 story packages with video, audio, printed stories, and images for the Web. They also coordinated 13 major interviews with President Hinckley. “We dealt with myths about the Church and found a way to interest national and international media in more than polygamy and the Word of Wisdom,” he explained. “We did everything from highlighting the Salt Lake Temple to showing the growth of Salt Lake City. The Olympics people like to go into an Olympic city and examine the culture. Well, we are the culture and history of Salt Lake City.”Olsen adds, “The Lord took a hand in some really remarkable ways, such as in the Light of the World presentations that were seen by the world.”With the unprecedented opportunity presented by the Olympics, it would be easy to think everything after that would seem anticlimactic—but that wasn’t the case. No sooner had Olsen drawn a breath after the Olympics than he helped prepare for the opening of the Nauvoo Temple in Illinois. “And it doesn’t end there,” he says. Managing public affairs for the Church of Jesus Christ is a good life for a man from rural Orangeville, Utah, who attended a year of college in Price before going on a mission and realizing he wanted the Church to be the most dominant thing in his life. He found this good life at BYU, where he served as editor of the newspaper before being elected student body president. He found it while serving as a mission president in Boston. And he especially found it working for the Church. In some ways his goals have come full circle. “As student body president I was an ad hoc member of the alumni board. I loved the opportunity to serve and told myself I would love to associate with the board again someday.” It was decades later, but this past year Olsen was selected to serve on the BYU Alumni Association Board of Directors as a fully participating member.

By connecting with other disciplines, psychology professor Hal Miller strengthened his grasp of his own.